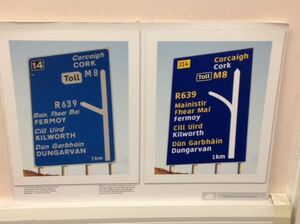 Further to proposed changes to Ireland’s road signage (above) giving prominence to the irish language.

One would hope that is not a sign of [Transport Minister Leo] Varadkar’s entrapment by civil service advisers, especially, when you see phoney mandarin language like ‘best international practise’ that is being used to justify it. But the reality is that he is trapped by the powerful role of the Irish language lobby which all politicians give homage to and which continues to insist on the compulsory aspect of the language, regardless of how few people are actually speaking it.
Indeed, it seems that the less that people are voluntarily speaking Irish, the more the lobby insists on its compulsory quality, like some bitter and declining religion. Thus, we even took the compulsion to Europe and managed to get Irish be made an official ‘working language’ in the EU much to the dismay of our fellow Europeans who know very well just how little it is actually used in Ireland. We used up a lot of credit with our European colleagues in Brussels, in pushing for this move by the Fianna Fail Government, according to my former diplomatic colleagues. But the Irish public wouldn’t even of aware of that. And later we really needed this credit on other, bigger EU issues. We’re a small country, after all, which doesn’t have lot of credit to begin with, so why were we wasting it on this?

…But the Irish like myths, especially official Ireland. We like to pretend certain things, even when it’s not the reality. Remember all that stuff about a United Ireland, for years and years, while people were really saying that ‘goodness, we don’t really want the North and all those problems.’ But we paid lip service to the myth, just as we do with the Irish language, a fact that annoys real Irish language enthusiasts more than anyone else, incidentally. For they know that the reality is that a language is revived and thrives when it is enthusiastically embraced by actual people and not when it is imposed on a passive population through unnecessary and confusing traffic signs…

Previously: Separated At Worth

What’s The Irish For Domino? 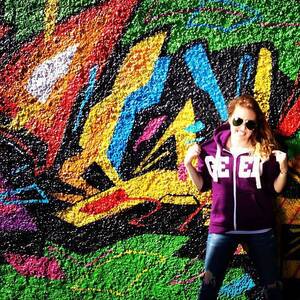 Irish As She Is Spoke