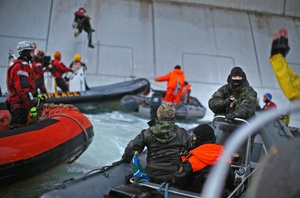 I’m a long time reader from Mayo living down in Auckland [New Zealand] and I’m working on the digital campaigns team for Greenpeace. I’m not sure  if you’re aware of the situation with our activists and crew being detained in Russia. Unfortunately, Greenpeace hasn’t had a
presence in Ireland since the ’90s and I’ve been trying to think of ways to spread info about our work and what’s happening to these peaceful protesters in Russia to an Irish audience. This (below) is an update…

Thirty people from around the world are being held in prison in Russia. It has been nearly 2 months since the Russian authorities boarded their ship, the Arctic Sunrise and now they are facing piracy and hooliganism charges which carry a possible total sentence of 22 years.

Their ‘crime’ was taking part in a peaceful protest against risky oil drilling by Gazprom in the Arctic.

Over 2 million people globally have spoken out about this injustice. Celebrities like Russell Brand, Stephen Fry and Thom Yorke have supported the Arctic 30.

Now it would be fantastic if we could raise the profile of this injustice in Ireland and Irish people showed their support for these peaceful climate defenders.

We’ve had documented problems with crackdowns on environmental protesters in Ireland in recent years but the response of the Russian authorities goes far beyond anything we’ve seen at home.

If you care about protecting the Arctic or even just feel that hanging a banner in protest on an oil rig should never result in years in prison, please send a message to the Russian Ambassador in Dublin.

You can send your message here.

Anything you can do to help spread the word is really appreciated. Please SHARE this, tweet about #FreeTheArctic30 and if you would like to offer other help in publicising this then please get in touch with me on twitter.