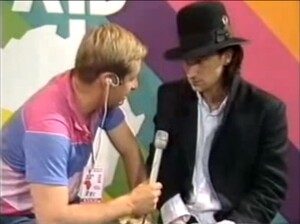 Even in 1985, taxation was at the forefront of Bono’s thoughts.

“It’s the governments of our countries responsibility to look after our money as we give them money in tax. And it seems to be an either or situation. Either they invest in life or they invest in death. And for the cost of MX missiles or Star Wars or offensive Defence budgets, we could turn those deserts in Africa into fertile land. The technology is with us. It is here. It is possible to do it.”
“So what I hope this as a public thing will affect public opinion which will ultimately affect the politicians and the policy makers. Bob Geldof says “I don’t know what to do but I’m gonna do something”. Wow! You know, I like that.”

Meanwhile…Bill Gates And Bono On Their Alliance Of Fortune, Fame And Giving (Forbes)

There He Is Now