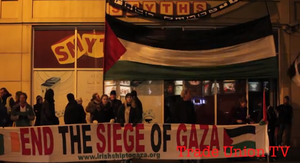 A protest was held last night at the opening of the ‘Made in Israel’ Film Festival at Cineworld, Parnell Street, Dublin.

The Israeli Embassy had billed the opening as a “Hanukkah Reception”. Hanukkah is the Jewish festival of lights, and the festival takes place at a time when the lights are off in Gaza, where people have been living without electricity for up to 20 hours per day for more than a month as a result of the Israeli siege and the closure of tunnels by Egypt.

For the last month, all of Gaza’s 1.7 million residents have been living without power for most of the time and in the shadow of a public health catastrophe, after their sole power plant was forced to shut down, causing the failure of several sewerage and water plants. The power plant, which until recently supplied 30 per cent of the Gaza Strip’s electricity, ran out of diesel fuel on 1 November. The resulting shutdown has exacerbated an ongoing water and sanitation crisis and has left Gaza residents without power.