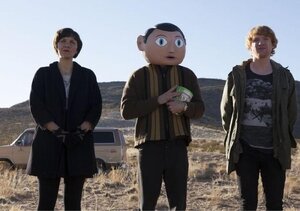 Lenny Abrahamson’s  Fassbender/Gleeson headlining ‘Frank’ will premiere at the Sundance Festival next month.

Frank is based on the memoir by Jon Ronson about a wannabe musician (Gleeson) who joins an avant-garde rock band led by the enigmatic Frank Sidebottom (Fassbender) — a musical genius who hides himself inside a large fake head.