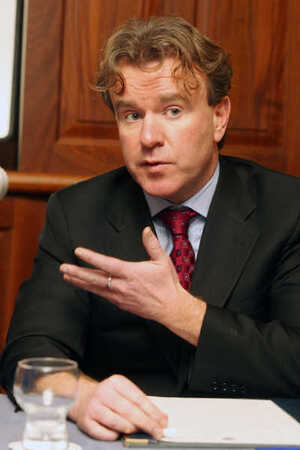 [Journalist Tom Clonan, whose son is a patient of the Central Remedial Clinic]

“I have four children, one of my boys [age 11] has a serious neuro-muscular disease and has attended the CRC for the last ten years. So for the last ten years we’ would have maybe three or four appointments in the CRC per week – physio, occupational therapy – and I know that there are thousands, maybe tens of thousands who are in a similar situation, who are carers of children who are disabled, or family members who are disabled. And the effect of this so-called controversy on the CRC has been devastating.
“You know, we deal with people, over the last decade, who put their hands on the limbs of our children, they provide a place of safety for us, they replace fear with hope. It’s because of the staff at the CRC, the therapists, the occupational therapists, the doctors, the neurologists, the paediatricians, the electro neurologists, the surgeons – and fortunately, I know them all.
“They are the reason that people like me can sleep at night. They have been very badly damaged by this tactical leak wich… and this story about the top-ups is purely a distraction from the damage that James Reilly is doing, and this government is doing, to our health services, and to front-line services – not just in the CRC, but across the public health system, and it’s an absolute disgrace.”

“…the CRC board, like many boards are full of political appointees, and we still have a political culture that appoints their own. So for Fine Gael and Labour…… and I saw Brendan Howlin express surprise at this issue – they still operate the same culture, there’s been no change since this government took office. We were promised new politics – we certainly haven’t got that.
“But I have to say that the staff in the CRC are as bewildered by this so-called controversy as are the service users and the clients, and they, and the other charities are the ones who are paying the price. And there needs to be a context put on this so that charities and institutions like the CRC don’t continue to suffer in this way.
“I think journalists need to put a context on this and ask the question, ‘Why was this information released to the Public Accounts Committee a week or two weeks after the chief executives of the voluntary hospitals put it up to James Reilly as being dangerous to patient safety?’ – and that’s what this is about, a smoke-screen for James Reilly’s absolutely disgraceful stewardship of the HSE.”