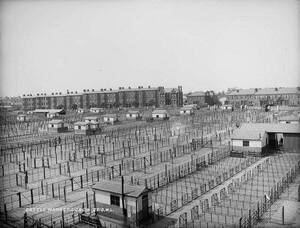 Bordered by Aughrim Street, Prussia Street and the North Circular Road, the Dublin cattle market was opened by the Rt. Hon. J.P. Vereher, Lord Mayor of Dublin in 1863. It was one of the biggest in Britain or Ireland. It operated every Thursday and before the break of dawn, cattle would arrive in by road from all parts of Ireland, primarily coming from Celbridge, Chapelizod, Dunshaughlin and Ashbourne. Some grazed overnight in fields along the Cabra Road. Many farmers indulged in the spit and shake excitement of selling the poor auld beasties amid the confines of the City Arms Hotel in Prussia Street and Hanlon’s Pub.

The poo-trails radiating out from the place were said to be legendary.

And A Big Toy Frog For The Kids

Driving Through Dublin In 1982 In Colour