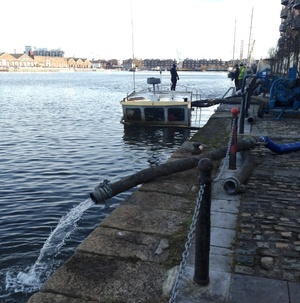 You may recall the submerged vessel you featured in August? The boat is being raised today (above). I have spoken to the owner several times over the past few months as he attempted to gather evidence about who sank his boat and also deal with Irish Waterways demands that it be removed. It seems a few local gougers who went aboard and trashed it so bad, it was hulled and then sank – leading to loss of much of his property including possessions of his dead father. Unfortunately the owner has had no luck identifying those involved. To add to his woes he has been given just 1 month by Irish Waterways to remove it – but to where remains currently unknown….

Craig Doyle Has One In His Jacuzzi. It Was A Gift From Satan.

How the Friendless Water Ski