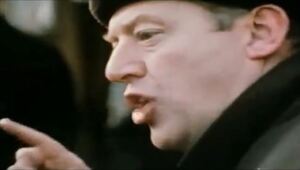 Four months later, on the 17th of May, three car bombs detonated in Dublin and Monaghan killing 33 people, the highest death toll in a single day of the Troubles.

In his interview with Eamonn Mallie to be shown on BBC One on Monday night, Ian Paisley when referring to the bombings is quoted as saying:

“The political leaders brought it on themselves. I was very much shocked that there was anyone going to be hurt in that way. But I mean, who brought that on themselves was the people that, their own political leaders, and they had endorsed in what their attitude to Northern Ireland, and at that time the attitude of the south government in Northern Ireland was ridiculous, so it was. I not only had nothing to do with it, but I’d said I had nothing to do with it and denounced the people who had done it… What more could I do? I took my stand. I denounced what was wrong, but I could not say to the people: ‘Just sit down and let them put a rope round your neck’.”

If Truth Be Told