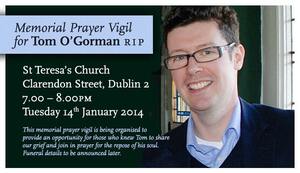 “He didn’t fit neatly into left or right. He would have been very aware of the need for social justice. He was an orthodox Catholic and lived that out in his life but he was in no way strident. He was involved in his faith. He was involved in the Focolare Movement, which emphasises spirituality for the everyday.” ““this is like something apocalyptic visited upon an innocent individual.”

“A Catholic by conviction, he had thought about the issues and grappled with them in a way most Catholics never do.”

“”Tom was an absolute gentleman. He was one of those guys who was absolutely inoffensive. The idea that anybody could have a bad word to say about him is incredible…”
…Tom liked to talk about politics and history. He was a dedicated member of the Focolare, an international Catholic movement based in Italy that promotes peace and reconciliation among Christians. Once or twice a year Tom would take himself off to Italy for a Focolare meeting. But if truth be told, the two things Tom liked to talk about the most, in my company at least, were rugby and football. Rugby was his first love and he had a rugby correspondent’s knowledge of the game. (He also did a fantastic impersonation of George Hook, come to think of it.).”

A Gentleman and A Good Guy (Cormac Murphy, Independent.ie)