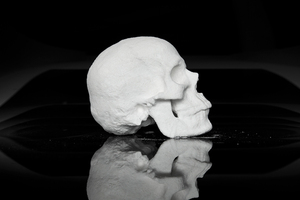 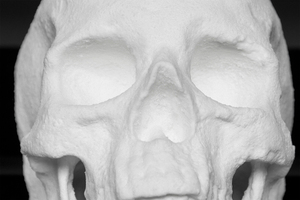 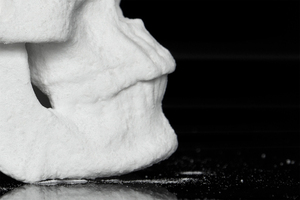 ‘Ecce Animal’ – a human skull made from street cocaine by Dutch artist Diddo.

As part of the project, the artist sent his materials off to a lab for analysis, where they were confirmed as cocaine but that ‘further constituent components identified included phenacetin, caffeine, paracetamol and a relative large percentage of sugars’.

Intended as a thought provoking piece on the nature of man in society, an accompanying poem by the artist suggests possible interpretations and conclusions that might be inferred. To wit:

once we were animals.
like any other, we lived in an environment of fear and want.
then, we became ‘human’ and aspired to be better.
we learned to control our environment but the fear stayed,
because we never learned to control ourselves.
it is frightening to look at the face of our animal side laid bare
by comfortable excess; the spoils of its aggression.
but what exactly is it about this image that is so confronting?
is it this division in our idea of self?
or is it a realization that though we have mastered the outside world,
we will always remain subservient to our inner selves.