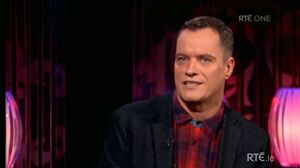 Panti Bliss aka Rory O’Neill (above) appeared on RTÉ One’s ‘Saturday Night Show’ and talked to Brendan O’Connor about his life.

On Sunday, our Lars Biscuits posted a short clip from the interview and an accompanying transcript.

Last night, RTE asked us to remove the video of the interview as “concerns have been raised about its content”. [We have asked who raised the concerns and are awaiting a reply from the station].

They further cautioned: “You are hereby put on notice that the publication and continued publication of this interview and any transcripts thereof may be defamatory.”

We are unable to embed the video for copyright reasons but have reposted the transcript (below) as we believe the question of what is a homophobe is one of opinion, the subject is one of public interest, the opinion is based on facts stated or known (e.g. Breda,/John/Iona’s opposition to gay marriage) and it appears to be honestly held.

Therefore (until we hear otherwise)…

We offer a right of reply to anyone mentioned.

Previously: Panti At The Abbi

Meanwhile, At The Abbey