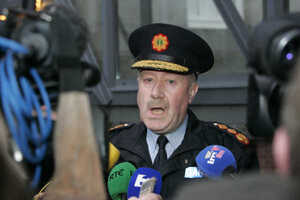 The Irish Independent reports that Garda Commissioner Martin Callinan won’t be “forced to go head-to-head with a garda whistleblower when he is quizzed about penalty points” at a meeting of the Public Accounts Committee on Thursday.

“The committee has confirmed that while the whistleblower may be called to give evidence at a future date, there will be no showdown with Mr Callinan this Thursday.”

Meanwhile, a report in the Irish Daily Mail this morning [not online] states that the anonymous garda whistleblower has given PAC a new dossier which apparently details further evidence of widespread termination of penalty points. This dossier is separate to a box of evidence that was handed to PAC in November and prompted a row between PAC and Mr Callinan.

“[Public Account Committee chairman] John McGuinness confirmed he had received a 20-page document from the whistleblower. He added that Mr Callinan would be questioned about the dossier and the previous findings of an internal Garda report on the points controversy, and any apparent differences.

“…Mr McGuinness said the whistleblower’s evidence and a report by the Comptroller and Auditor General seemed to ‘contradict’ the findings of an internal Garda report on the points controversy.”

Previously:  Not Seeing Your Points

To Protect And Swerve