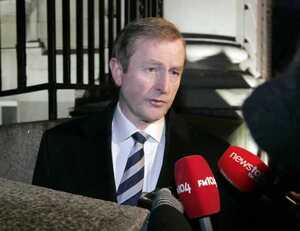 “I think this was an example of a woman of extraordinary commitment, over a long number of years, to following through her case being taken before them. Sadly, it’s one that’s indicative of a long litany of cases in Ireland, where these and other events took place. That’s why, in the past, we’ve had to deal some exceptionally sensitive cases that scar our memory. And for that reason I just think that, while this judgement is exceptionally complex and will be studied by Government, I would like to say to Louise O’Keeffe that I apologise for what happened to her in the location where she was and for the horrendous experience that she had to go through.”

Taoiseach Enda Kenny, speaking in the Dail this morning.

Ms O’Keeffe was sexually abused by teacher Leo Hickey when she was eight and attending Dunderrow National School in Co. Cork in 1973.

In 1998 Hickey was convicted of 21 sample charges involving 21 children from 380 charges.

Ms O’Keeffe tried to hold the State liable but the High Court dismissed her case, as did the Supreme Court.

This week the European Court of Human Rights overturned the Supreme Court ruling.

The State had tried to stop Ms O’Keeffe’s application to the ECHR, arguing her failure to sue the Diocese of Cork and Ross, which owned the school, showed she didn’t exhaust legal avenues in the Irish court system

The ECHR found: “That obligation [to protect her from harm] had not been met when the Irish State…continued to entrust the management of the primary education of the vast majority of young Irish children to National Schools, without putting in place any mechanism of effective State control against the risks of such abuse occurring”.

Gilmore: “You Can’t Always Choose Who’s In The Photograph.”