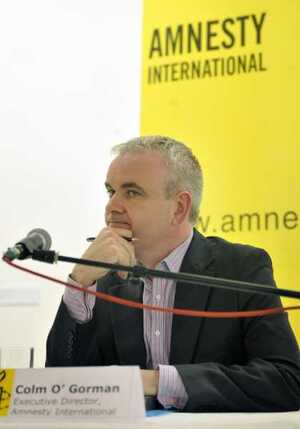 Breda O’Brien, of the Iona Institute, and Colm O’Gorman, of Amnesty Ireland, appeared on last night’s Late Debate on RTE Radio One.

Audrey Carville: “Before we get into the substantive discussion tonight, I want to mention the fact that, over the past number of days, RTÉ issued an apology and made a financial settlement to you, Breda, and to a number of others, including the Iona Institute and this followed allegations made on the Saturday Night Show, on television two weeks ago, during an interview with Rory O’Neill, who’s better known as drag queen, Panti Bliss. Now RTÉ have not issued a statement to us about this matter for our programme tonight. But Breda, as far as you’re concerned, has a line now been drawn under this?”

Breda O’Brien: “Yes, I think it’s really important that we have a rational and a calm debate and that people don’t reduce it to hurling insults at people to close down debate. I think RTÉ let its standards slip in that regard but they were big enough to come forward and to apologise and I’m certainly very pleased with that, very pleased to accept the apology and move forward..”

Carville: “Colm, O’Gorman, as an openly gay man, what do you make of all of this?”

Colm O’Gorman: “Well to be honest, I’m, I’m, well, to put it simply, I’m rather stunned by where all of this has gotten to and I don’t understand how we’re ever going to have a reasoned, or reasonable debate, if we can’t challenge each other’s viewpoints and even question what those viewpoints might be based upon. As it happens, I didn’t see the programme but when I saw it being reported, and some of the comments, that were being attributed to Rory, in the programme, I was lucky enough to grab before it was, on foot of legal action by Breda and others, removed and censored from the public airwaves. So I went into it and I listened to it and I have to say, I thought it was one of the most considered, inclusive, insightful explorations of how we are all capable of holding views that are discriminatory and that can cause us to make statements that are hurtful, that are damaging, that are destructive of other people. And what I heard Rory say is that we’re all capable of holding homophobic or racist, or xenophobic views and that we occasionally need to check ourselves, now I think that’s a really important discussion that we need to have. You know, to be honest, I don’t understand why anyone feels enormously insulted by being accused of being homophobic. I mean I’m a gay man and I’ve certainly been guilty of holding homophobic views – both views that I held about myself but also views I held about other sections of the LGBT community and other people who live lives in ways I perhaps didn’t understand.”

Carville: “You’re saying we’re all capable of being bias?”

O’Gorman: “We’re all capable of bias. We’re all capable of holding views that are based on discriminatory views, or internalised bigotry that we’ve taken on in other ways and I simply do not understand how challenging people, to examine the basis upon which they put forward certain arguments is defamatory and, you know, equally, quite frankly, I don’t think..People have a right, I think, to express views that other people might be offended by. Nobody has a right not to be offended. And I will defend Breda’s right and anybody else’s right to say things that I find offensive but I think I also have a right to name them as offensive and to seek to have a clear, rational, reasonable discussion about that.”

Carville: “Do you want to come back on that, Breda?”

O’Brien: “If it had been a case that it was talking about, in general, about all of us examining our consciences, I don’t think that I would have been, and other people would have been, in discussions with RTÉ. What it was about was naming a specific individual who was not there to defend herself and another individual who was not there to defend himself. It was claiming bad faith on their part, that they were, that my position, which is that a child, where possible, should be reared by their own mother and father, is now deemed homophobic commentary. RTÉ obviously felt that they had something to apologise for and the reason that they did so is because the legal definition of homophobia is that you have a fear and loathing, and suspicion of people who are gay, which is an appalling thing to throw at somebody. And I…it was then compounded later on by people in the Irish media, in their columns, saying that people who are against marriage equality, if you want to use that term, that people who are against that, are people who are responsible for gay people being beaten, murdered, fired from their jobs and that there should be a defamation watchdog set up so that people couldn’t express these views. Now this is very far from a rational and calm debate. This is actually going way into the territory of saying that we will declare your views out of order before you even begin. And I don’t think the Irish people want that. Like, during referendums regarding abortion, people were immoderate on my side of the fence and I always called them out when they were, when they used appalling expressions. I think we have a right in this debate to have the same level of respect, mutual respect and that you don’t label people and that you don’t dismiss their good faith. And, really, I think, I came here tonight to talk about Catholic education, I think it would be really good if we got onto that debate.”

O’Gorman: “Yeah, absolutely. I do think this has been a very, very damaging incident. and I really do think RTE needs to explain the basis upon which they felt entitled or required to pay damages from taxpayers’ funds on the basis of this. If this was indeed defamatory then indeed the rationale or the basis, upon which RTE believes this was defamatory, needs to be explained.”