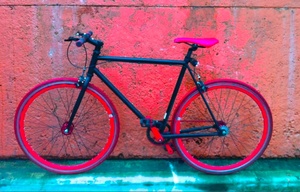 “I know you don’t normally do this, but my bike has been stolen.. “Dorothy” is a No Logo bike, with red wheels and black Gatorskin tyres. The frame is black, and the seat is now worn down and almost completely white. Whoever took it got through a Kryptonite lock. Last seen around Barrow Street [Dublin] on Wednesday evening. Heartbroken without her. If anyone sees her, will you tweet me a photo @ConorKav or leave details with Broadsheet [below]”. In addition, as a member of the LGBT community – thanks for featuring the Pantigate issue so much.”