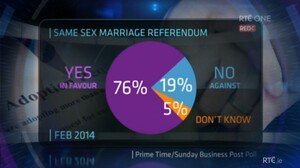 80% of those polled said that people in same sex relationships should be able to have the same rights as traditional families, 41% said they had some reservations about adoption by gay couples.
49% of people said they believed in equal rights for gay people, but had some reservations about same-sex marriage.
41% of respondents said they believe those who oppose same sex marriage rights are homophobic while 59% disagreed.