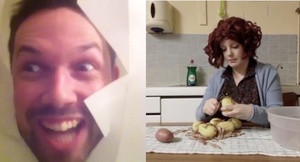 All work and no play…

For their Fund-It video, the Darklight film festival – “Ireland’s premier festival celebrating independent, animation, DIY, VFX and artist films” – asked some filmmakers to reinterpret and remix a classic film scene of their choice “all squished into a 6 second vine”.

The First person to name ALL the movie references (above) wins a pair of passes to the festival!

Lines close at .. FURTHER EXTENDED UNTIL 10am.

Over the course of four days, Darklighters will transform Smithfield Square [Dublin] into a nerve centre of forward-thinking film, digital storytelling, collaborative workshops, discussions, and parties held across the community’s motley venues. We need your help to paint the canvas.

Mrs Robinson, Are You Trying To Seduce Me?