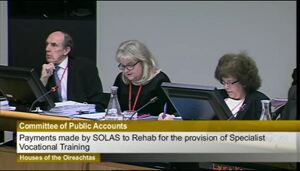 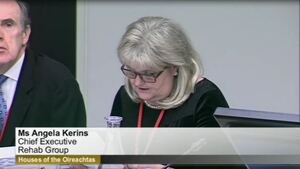 From her opening statement:

“There’s a lot of confusion in the public mind as to how independent, not-for-profit companies like ours receive funding from the public purse. The two main Rehab Group companies that contract with the Irish State are RehabCare, as I said, and NLN [National Learning Network] And they’re represented here today by their respective executive directors, Laura Keane and Marie Kelly.

We’ve provided all the detailed information that both contracted organisations require and this includes details of salaries and other costs. John McGuire, who’s a director of Rehab Lotteries, is also here to help with the discussion on the charity lottery compensation fund and the unfair cap on charity lotteries.

We’ve come here today at short notice to provide support to you in your examination of public expenditure in these areas. But we’ve also come here to clear up a few misleading information regarding our lottery business and it’s related income. I want to mention the issue of salaries that has been given some media space over the last months. The salary of the Rehab Group chief executive [Ms Kerins] and group management team is set by the board, following advice from independent renumeration experts as to the rate of the jobs in the market. This team oversees not only one charity but an international group of charities, commercial companies, joint ventures and limited liability partners. We’re also involved at policy-level and are recognised internationally as experts in our field. And such a diverse organisation is expert management capable of operating across this whole wide domain.

While I’m not privy to all of the deliberations of the Rehab Group board, I am aware of the methodology used. Each job is evaluated by a size function and the sector of which it has relevance.There is a comprehensive scoring system involved and the comparators are from a representative sample of private sector status in semi State companies. The system works out the market median, i.e. the salary level in the middle of the market. For well over a decade, all senior salaries of the Rehab Group have been advised by independent assessment and set in the median. However, while the market median is the desired Rehab Group position, I can tell you all that the group management team are at least 20% below the current market median for the total renumeration and have been for some years. And, chairman, I can go through that in more detail if you want later on in relation to that methodology.

And for clarity, the salary of the Rehab Group Chief executive is not being paid out of the funding being discussed here today.

It Could Be You