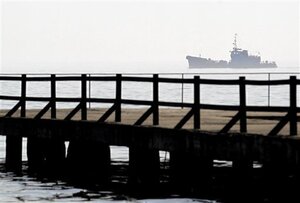 [the port of Kerch, Ukraine this afternoon]

The Russian forces, already in control of much of Crimea, took possession of a ferry terminal in Kerch, in the eastern part of the peninsula just across a strait from Russian territory, according to reports from the area. The terminal serves as a departure point for many ships heading to Russia and could be used to send even more Russian troops into Crimea.