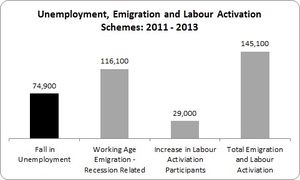 Further to the drop in the number of people signing on the live register.

“This [graph above] measures numbers between the 3rd quarter of 2011 (when unemployment in absolute numbers was at its highest) and the 4th quarter in 2013. The numbers in unemployment fell by 75,000.

Michael Taft, economist with UNITE the trade union [who acknowledges that not all emigration “can be put down to recession-related factors”].