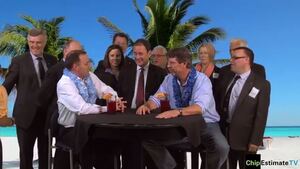 “This video has emerged of the former Lord Mayor of Dublin, Fine Gael’s Naoise O’Muiri, behaving rather strangely whilst visiting the marketing director of a Silicon Valley technology company during the annual Lord Mayor visit to San Jose in March 2013.”

“… ‘That trip cost €9,953 for the travel and accommodation of the Lord Mayor himself and two other councillors we see in the video, Fine Gael’s Ruairi McGinley and the Labour Party’s Lucy McRoberts. Did this money come out of the Lord Mayor’s €15,318.36 quarterly allowance or was this money on top of that?

“… Really, what value did we the people receive from that junket to San Jose in March 2013?”

A statement from John Lyons of People Before Profit