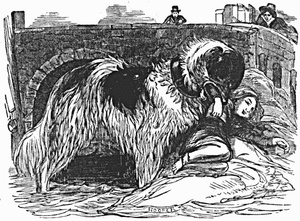 [A Newfoundland   a child]

“Just browsing through ‘Brown’s ‘Biographical Sketches and Authentic Anecdotes of Dogs’ (as you do) when I came across this daring canine act of bravery at Carlisle (now O’Connell) Bridge.

“One day, as a little girl was amusing herself with a child, near Carlisle Bridge, Dublin, and was sportively toying with the child, he made a sudden spring from her arms, and in an instant fell into the river. The screaming nurse and anxious spectators saw the water close over the child, and conceived that he had sunk to rise no more.
“A Newfoundland dog, which had been accidentally passing with his master, sprang forward to the wall, and gazed wistfully at the ripple in the water, made by the child’s descent. At the same instant the dog sprang forward to the edge of the water. While the animal was descending, the child again sunk, and the faithful creature was seen anxiously swimming round and round the spot where he had disappeared. Once more the child rose to the surface; the dog seized him, and with a firm but gentle pressure, bore him to land without injury.
“Meanwhile a gentleman arrived, who, on inquiry into the circumstances of the transaction, exhibited strong marks of interest and feeling toward the child, and of admiration for the dog that had rescued him from death. The person who had removed the child from the dog turned to show him to the gentleman, when there were presented to his view the well-known features of his own son! A mixed sensation of terror, joy, and surprise, struck him mute. When he had recovered the use of his faculties, and fondly kissed his little darling, he lavished a thousand embraces on the dog, and offered to his master five hundred guineas if he would transfer the valuable animal to him; but the owner of the dog felt too much affection for the useful creature, to part with him for any consideration whatever.‘”

For anyone interested in the exact location, it seems to have been at Aston Quay and it seems to have happened some time in the late 18th century. The name of the dog is unknown, but it apparently belonged to Colonel Wynne. Long-time readers of Broadsheet may remember another post 9link below0 about a different Newfoundland dog which took part in a daring sea rescue some years later, and now haunts St Patrick’s Cathedral…