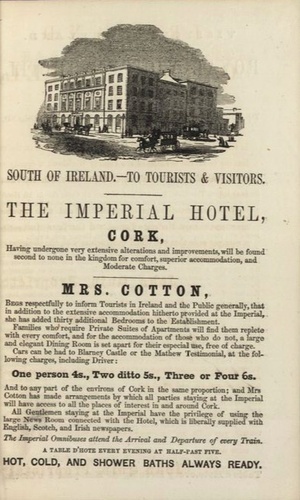 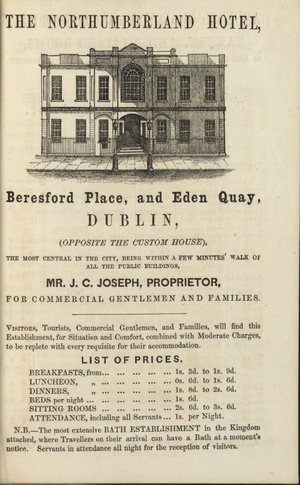 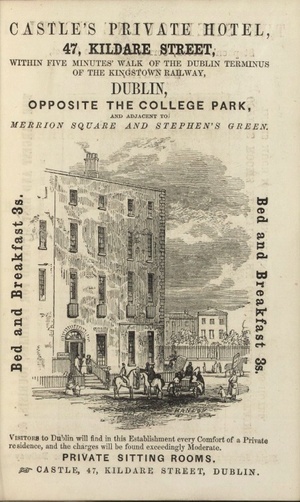 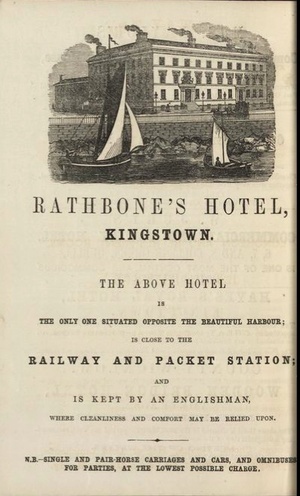 Advertisements for Irish hotels, some long-forgotten, some familiar, from the Tourists’ Illustrated Handbook for Ireland, 1854 From top: Cork’s Imperial Hotel; Dublin’s The Northumberland (Beresford Place), The Shelbourne (Stephen’s Green), Castle’s Private Hotel (Kildare Street) and Rathbone’s Hotel (Kingstown/Dun Laoghaire), where, we are assured, the cleanliness can be relied upon as the establishment is ‘kept by  an Englishman’. 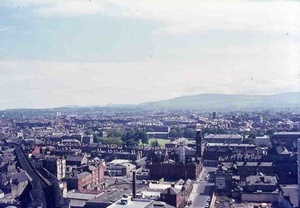 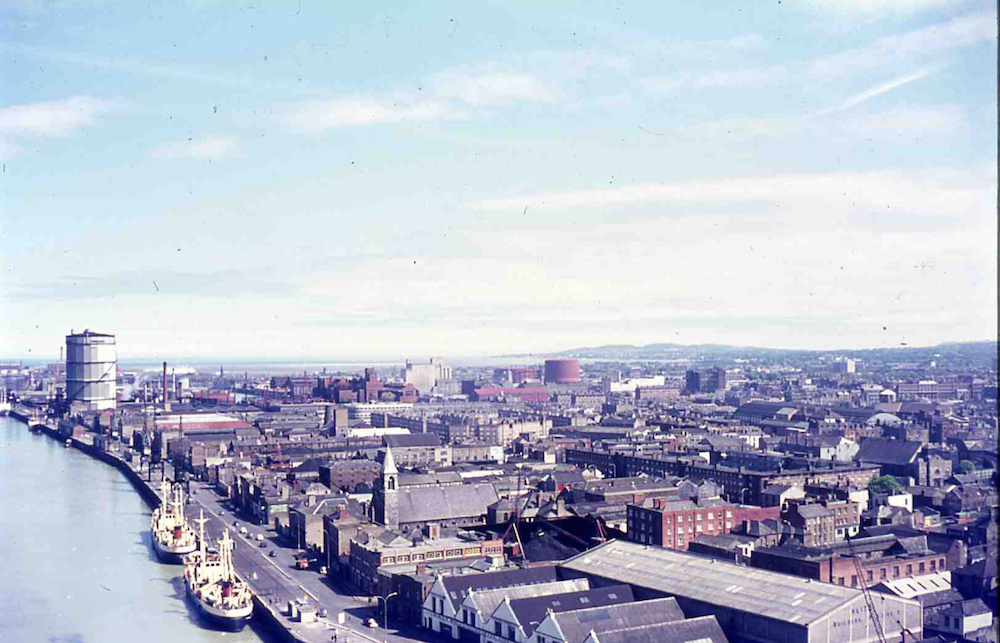 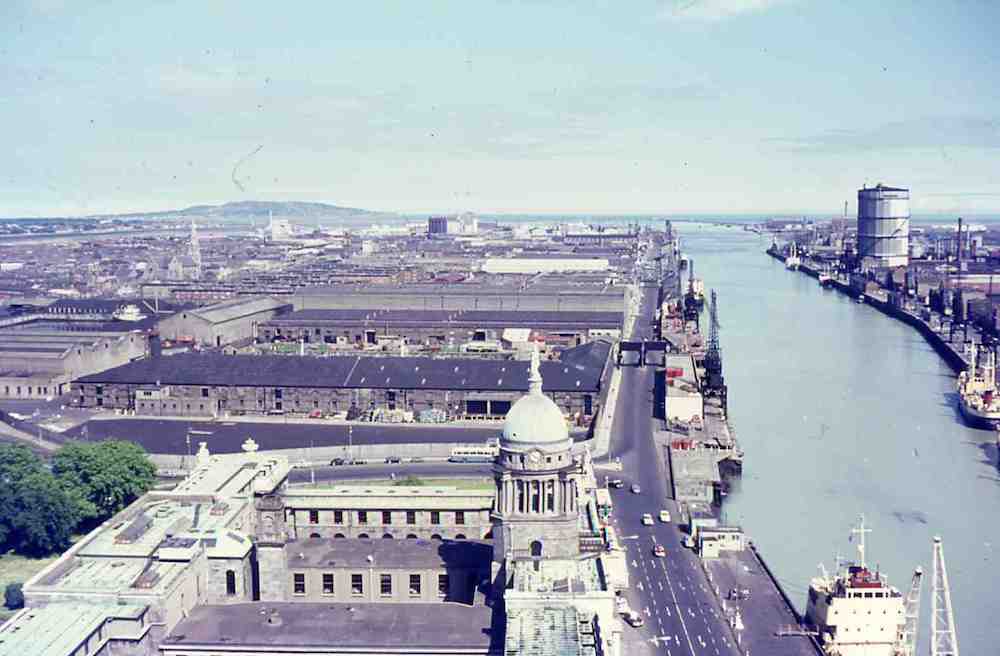 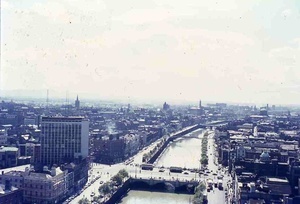 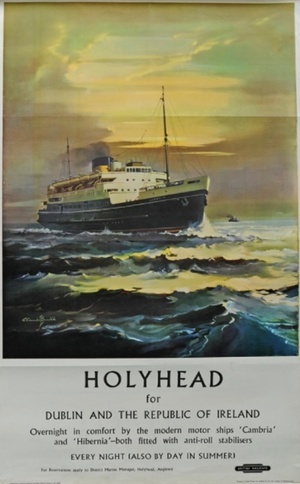 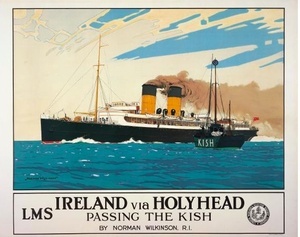 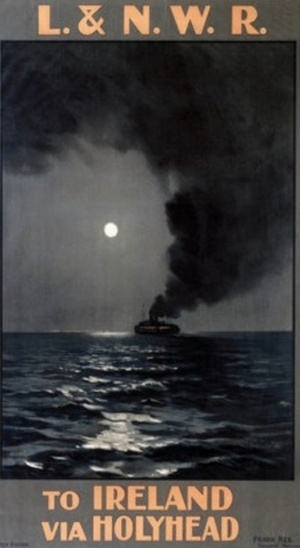 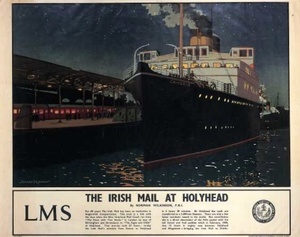 A portal to another world.

Travel to Ireland via Holyhead [North Wales] in the 1940s and 50s, as depicted in these dreamy travel posters by Norman Wilkinson and others…

Posters via Railwayana and TravelPosters.com 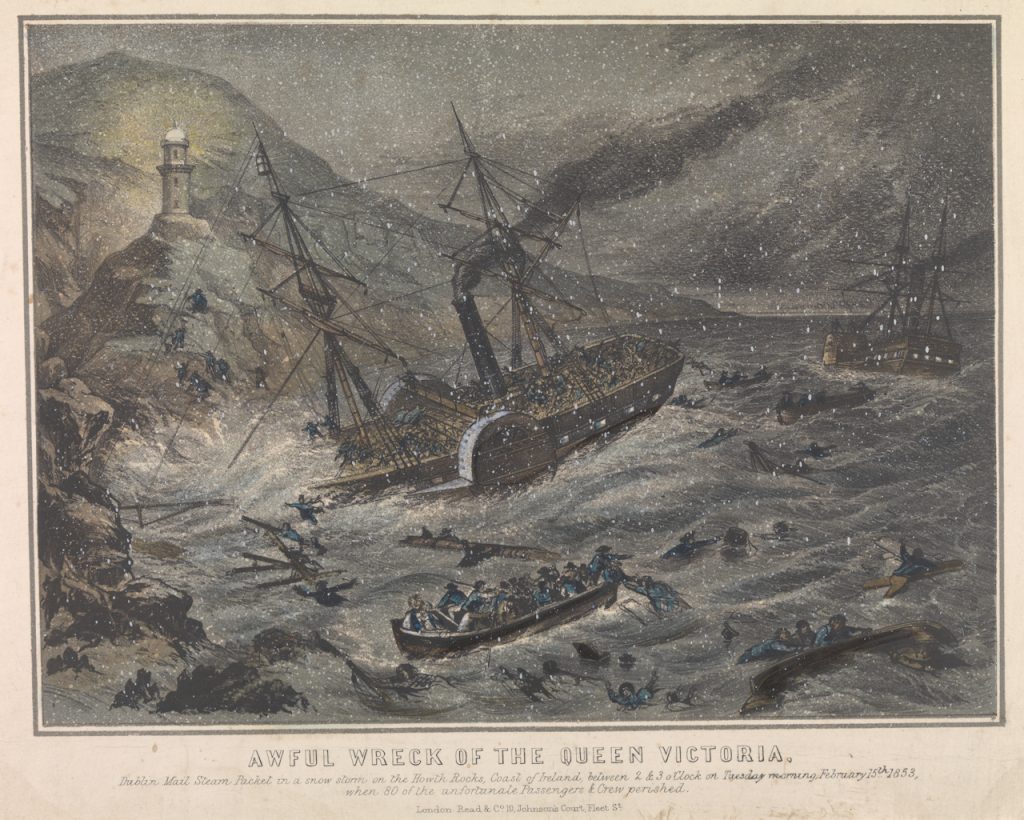 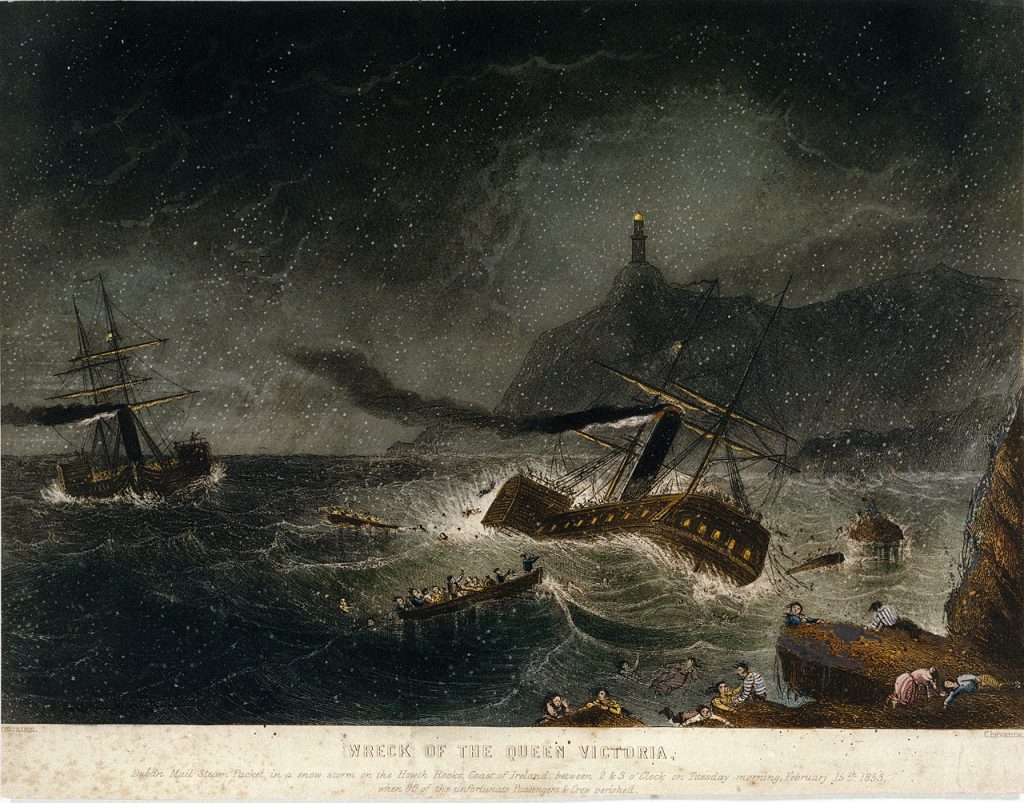 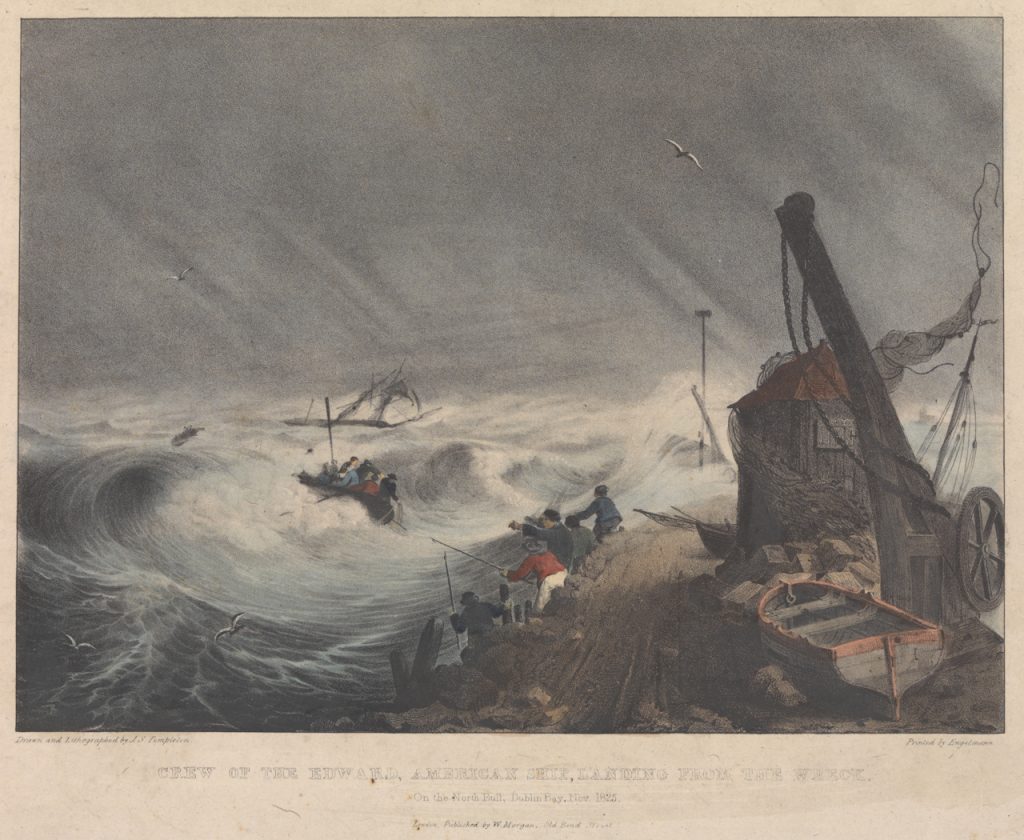 Some dramatic paintings of wrecks in Dublin Bay that might interest Broadsheet readers, from the image archive of the National Maritime Museum in Greenwich, London.

(1) and (2) represent the wreck of the paddle steamer Queen Victoria (1853), which struck the rocks below the Bailey lighthouse [Howth, County Dublin] during a snowstorm in February 1853. Varying reports record deaths of between 53 and 80 passengers and crew.

(3) represents the crew of another paddle steamer, the Edward landing on the North Bull after another wreck in 1825.

A full list of recorded wrecks in Dublin Bay from 1576 onwards may be found here.

No, not Oscar Wilde, silly.

Sibling of Daedalus, of Tales of Old Dublin, writes:

Gustavus Cornwall, head of the Dublin Post Office, was accused in Parliament by MP William Smith O’Brien of engaging in frolics with other men in the hothouses of the Botanic Gardens, Dublin, and at musical dinner parties in Raglan Road [Ballsbridge, Dublin 4].

His co-accused were Captain Martin Oranmore Kirwan, known as ‘Lizzie’ and Malcom Johnston, known as the ‘Maid of Athens’, after the poem by Lord Byron: “Maid of Athens, ere we part, give o give me back my heart’. Mr Cornwall himself was known as ‘the Duchess’.

William O’Brien was protected by parliamentary privilege; however, when he repeated the allegations in his journal United Ireland, the Duchess sued for libel.

The jury found against him after a number of men came forward to testify in support of Mr O’Brien’s allegations.

Like Wilde, not one, but two, criminal prosecutions subsequently ensued, but a sympathetic judge at the later trial not only encouraged the jury to find against Mr Cornwall, but also recommended that the press exercise their ‘discretion and Christian forbearance’ against publication, allowing Gustavus, unlike Oscar, to retain his reputation.

He was ultimately acquitted on the merciful, if unimaginative, testimony of three doctors that it was physically impossible to commit sodomy within the confines of a hansom cab. 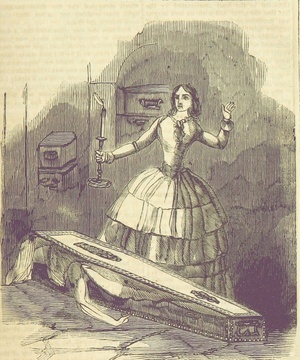 Forgotten Irish Tricksters is an occasional series where historian Sibling of Daedalus unearths the inventive Irish con men and women lost to time.

Bridget Connell, of 35 Cook Street, Dublin, was an elderly lady with only one thing of value: her life, which was insured with the British Life Assurance Company for the sum of £8.

On March 16, 1904, her niece, Mary O’Neill, with whom she shared a tenement, told Mrs Connell, who was ill in bed, that she was in financial difficulties and going out to get money, to lie very still with her eyes closed and not to be annoyed with her.

As instructed, Mrs Connell lay very still all day. She must have known there was trickery, for her niece had left her covered in a shroud and surrounded by candles, but she did not realise that the trick was on her.

The penny dropped, however, at 4 pm. that evening, when a little girl, passing down the stairs, told her that Mary was up on nearby High Street in a cab with a coal porter and a Royal Fusilier, having a merry old time.

Mrs Connell might have been 83 years old but was not slow at putting two and two together. She headed promptly to the nearest British Life Assurance office, only to find that she had been declared dead by her niece earlier that day, for the purposes of obtaining payment under the policy.

The revived corpse was still very much alive at the trial of Mary O’Neill in the Southern Police Court, Dublin, which took place later that year. Mrs O’Neill’s defence that her aunt was expected to die any time was not accepted by the court.

Bitter after having been sentenced to two months’ hard labour, she informed the court that she was sure Mrs Connell would be dead and buried before she came out. It is not clear if this happened.

What is clear, however, is that old habits die hard… 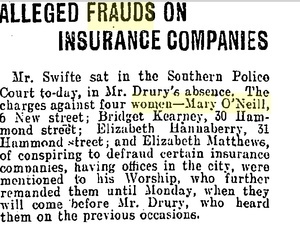 This time, her husband, William O’Neill, whom she had described, when registering his death, ‘as fine a man as you could wish to see, and now he is gone’, who came back from the dead to give evidence against her….

illustration: ‘The Spectre of the Hall’ by JM Rymer 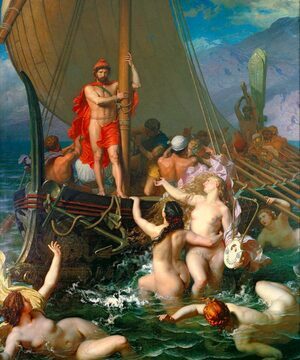 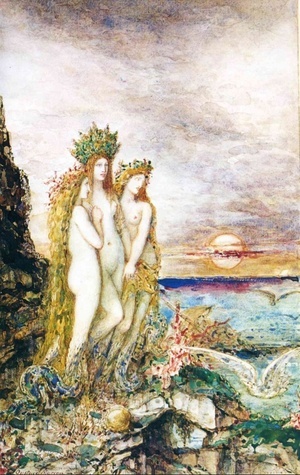 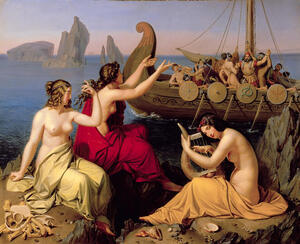 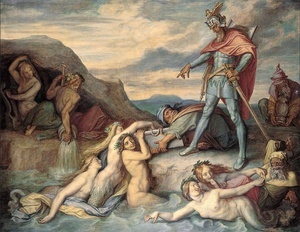 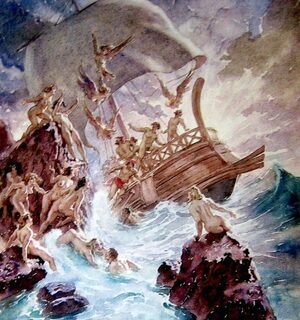 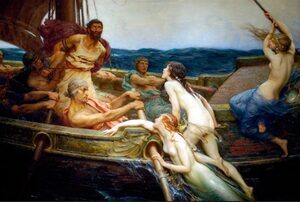 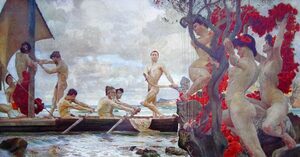 For the Bloomsday that’s in it.

A swarm of Sirens selected by historical blogger Sibling of Daedalus.

Episode 11 of Ulyssess takes place in the Ormond Hotel where Leopold Bloom reimagines two barmaids and a lady of the night as the mermaids inducing men to their deaths in Homer’s epic, Odysseus.

To give these much-maligned, femmes fatlales their due (Siren’s Day?) behold a hand-picked collection of virtually irresistible, shore-based temptresses captured by painters through the years. 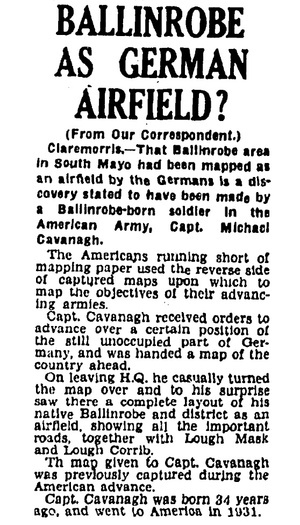 Forgotten Irish Tricksters‘ is a series by historical blogger Sibling of Daedalus exploring the absolute chancers that brought acting the maggot to an artform but are now barely remembered.

Throughout the Battle of the Atlantic, the bodies of dead German airmen washed up with regularity onto the rocks of the coasts of the west of Ireland.

Occasionally it was rumoured that, like the sailors of the Spanish Armada, some of them survived, hidden in remote cabins, awaiting a more formal invasion by their countrymen.

No one was entirely surprised, therefore, when, in 1944, two teenage girls, Maureen Corrigan and Charlotte Brownlee, reported the presence of foreign parachutists in the Ballina area.

But, after an apparently thorough search by army and Gardai failed to uncover any trace of foreign men, the girls were charged, convicted and sentenced to several months for wasting official time and general trickery.

According to the judge hearing the case, Corrigan and Brownlee were thoroughly bad, their actions prompted by exhibitionism, the wish for their photographs to appear in the papers, and the desire to be interviewed at length by high-ranking army officers.

However, the following year, Sergeant Michael Cavanagh, a Mayo-born soldier in the American Army, disclosed to the Evening Herald the existence of Nazi documents designating North Mayo as a leading airfield base in the event of an invasion of Ireland.

Nothing has been heard of the girls since their conviction and sentence.

High-level trickers or lowly victims of a Churchill-deValera cover-up? 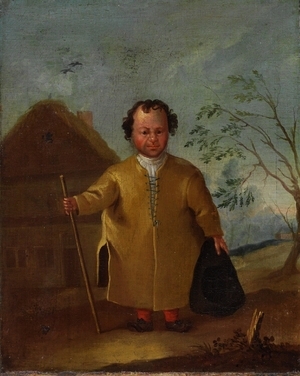 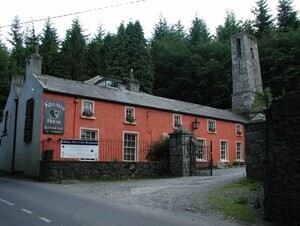 The secret of a very small sacrifice in the Dublin mountains.

There is a story, and it could be just that, that a plumber found skeletal remains in the Hellfire Club in 1970. It is said that they were “dwarf-like” and it is believed a dwarf may have been sacrificed there in the 18th century. There seem to be no official reports from the time of a skeleton being found there. It’s probably just an urban myth but the accounts that a plumber found the remains is quite specific.”

There was indeed a skeleton found in 1970. It was not found at the original Hellfire Club at the top of Montpelier Hill but at a building nearby to which the Club relocated following the famous fire of 1740.

The premises in question is now the Killakee House Restaurant at 12 Kilakee Road, Rathfarnham (see above).

There are numerous reports of hauntings associated with the house, which is widely reputed to be haunted by a large black cat with poltergeist tendencies, a portrait of which, by artist Tom McAssey, hangs in the house to this day.

However it was only in 1970 that a plumber carrying out work to the house discovered a tiny skeleton under the kitchen floor. First thought to be that of a child, the size of the skeleton’s head led to the conclusion that it was more likely the remains of a dwarf.

No dating was carried out on the bones of the skeleton before it was buried; however the presence of a statuette of a miniature devil found under the same floor raises the possibility that its remains could well have been associated with Hellfire Club activity.

There have been no recent reports of ghosts in Killakee House. Perhaps the second exorcism, carried out after the skeleton’s discovery, laid them to rest? 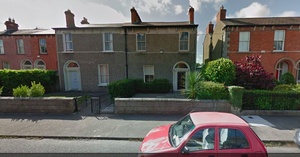 In 1917 the landlady of 14 Windsor Road, Dublin, let lodgings to a young, smartly dressed and affluent woman, whose husband was said to be in the American Navy.

From the first day of her arrival, she took a great interest in the garden of the house, and kept her own pet flowerbed below her window. The lady subsequently left, and her carefully tended chrysanthemums fell into disarray.

One day, two gentlemen called to the house, and asked the landlady for permission to dig in the flowerbed. A spade was produced, and a small box, wrapped in brown paper, containing diamonds of considerable value, found buried under four narcissii.

The lodger had been the famous jewel thief, 19 year old Clara Whiteley. otherwise known as the Girl with the Diamond Eyes.

She had, without any assistance, stolen the diamonds from from a jeweller in Great Portland Street, London, by pretending she wanted to show them to her husband, who was in another room. In fact, there was no husband, only Clara, long gone when the jeweller went looking.

Clara’s subsequent conviction and deportation to South Africa did not deter her from a life of crime. She was last heard of in 1934 when (as Cecilia Beresford) she was sentenced to 13 months’ hard labour for stealing a cigarette case.

Previously: Sibling Of Daedalus on Broadsheet