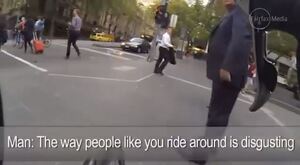 A female cyclist was knocked from her bike on Collins Street in Melbourne yesterday when a man opened the passenger-side door of a taxi.

The woman captured the incident, and the follow-up conversation she had with the man who stepped out of the taxi, on camera.

Would never happen in Dublin.

Have You Ever Been Doored?