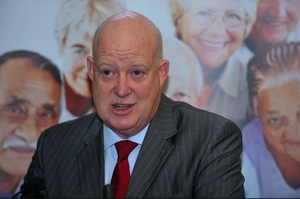 [Brian Purcell, Secretary General at the Department of Justice]

You may recall the letter of March 10th that former Garda Commissioner Martin Callinan sent to the Secretary General of the Department of Justice, Brian Purcell, for the attention of Justice Minister Alan Shatter.

Mr Callinan’s letter said that, during the process of discovery in the Ian Bailey’s civil action case, it emerged that telephone calls in Bandon Garda Station had been recorded, between gardaí and key witness Marie Farrell – who claimed in 2012 that gardai forced her to perjure herself in order to incriminate Mr Bailey – and journalists.

It also explains how Mr Callinan ordered for the widespread recording of calls – bar 999 calls – to be stopped on November 27, 2013.

Minister Shatter told the Dáil he never received the letter until March 25 – hours after Mr Callinan stood down from his role.

It should also be noted that Taoiseach Enda Kenny Kenny had sent Mr Purcell to Mr Callinan’s home to convey Mr Kenny’s concerns about the phone recordings on the night before Callinan stepped down, March 24.

Finian McGrath, who is a member of the Oireachtas Justice Committee, wanted Mr Purcell to come before the committee to explain what happened.

But last night the committee decided to hold off on bringing Mr Purcell in until Judge Nial Fennelly’s Commission of Inquiry set up to study the garda station tapes has its terms of reference in order.

Mr McGrath spoke to Ivan Yates on Newstalk this morning.

Finian McGrath: “Well, I have to accept first of all that I was fully surprised myself. I went went into The Justice Committee yesterday with three objectives. First of all, to get Brian Purcell in, The Secretary General and his senior civil servant. Secondly, was to get the former Garda Commissioner in. And the third, I asked the question, was, ‘Would it be in order to invite The Attorney General in?’. So at the meeting, legal advice was given that we were not allowed to call The Attorney General – and I accepted that advice. But on the other two issues, the legal advice given at The Committee was that we could go ahead, that we had the power, we had the authority, and let’s get on with it. So I proposed that we bring in those two. But the vast majority – I was the only one – everyone in The Committee said, ‘No, we’re going to park this for a week and we’re going to try and make a few decisions on the terms of reference for The Commission of Inquiry and then maybe next week. But my position was, I just wanted simple answers, I didn’t want a commission of inquiry or a justice committee, I didn’t want any additional costs – all I wanted was simple questions answered by The Secretary General – and by the way, it’s not personalising the guy, or demonising him, and there’s still issues there – the bereavement in the family over a few days – but there’s Asssistant Secretary Generals, there are other senior civil servants – just answer the question, ‘What the Hell went on and why didn’t they deal with the letter on the 10th of March?’. These are simple questions that the public are asking me to ask – and I was just blown away with what happened yesterday with the kind of …. I suspect a rat, by the way, Ivan. I was a bit concerned that they were trying to drag it out over the terms of references. I hope that this discussion over terms of references doesn’t go on for another two weeks.”

Ivan Yates:  “Why was this meeting held in private?”

McGrath:  “It was held in private just to see what we’d do.  We wanted to make a collective decision on the way that we would approach the issue.  Because some people were saying that we should… that they should completely stand back and proceed with…{interrupted}

Yates:  “Finian, I don’t want to do this , but, a  few months ago when we were covering the Penalty Points issue with The Public Accounts Committee, there was an attempt by Government Back Benchers to stop that entire process…”

Yates:  “…and to not facilitate the whistleblowers – that the whole thing was going to be referred to GSOC and we railed against that, that this was purely political – and all we were looking for on this programme was to establish the truth. Now, in these circumstances, I have to ask you to name names of who was against having Brian Purcell before The Committee – were they  Fine Gael and Labour Back Benchers?”

McGrath:  “The answer to the question is yes, but, can I emphasise that they did plead with me to back off on my proposal, because they said that if they didn’t get their input into the terms of reference by the end of next  week that they would possibly bring in the Secretary General and the former Garda Commissioner – so in fairness to my committee colleagues, even though they disagreed with me very, very strongly – but the answer to the original question Ivan was, ‘yes’, The Government Back Benchers all took the same line and also, I have to say, some of The Opposition as well – I was very surprised at the reaction of some of The Opposition TDs.”