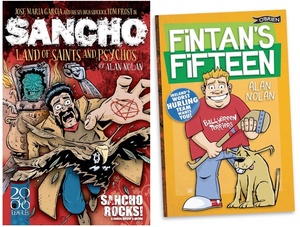 Say hello to Karl and Nat.

“Just to let you all know that this weekend at the MCM Ireland Comic Con in the RDS [Ballsbridge, Dublin] we [Alan and co-creator Ian Whelan] will be launching a new edition of Sancho — Ireland’s favourite Dublin-based Mexican ex-exorcist-priest-cum-demon-hunter black-horror-comedy comic. Previously shortlisted for two prestigious Eagle awards this marks the return of Sancho to the comic book shelves after an absence of four years!.
ALSO Fintan’s Fifteen, an illustrated novel about the worst U12s hurling team in Ireland (tagline: You’ll laugh, you’ll cry… you’ll hurl) will be available nationwide from April 21 but will also be at  our stand at MCM Dublin’s Comic Village for an early bird sneaky peek.”

The All Too Brief Return Of Bill Watterson