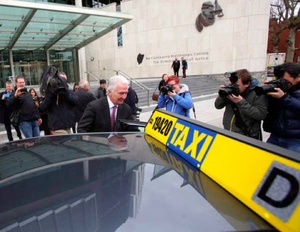 A number of charges against Sean FitzPatrick, former Chairman of Anglo Irish Bank, relating to loans to the Quinn family were dropped today in the High Court.

Judge Martin Nolan ruled that Mr FitzPatrick [who awaits judgement on several other charges] be found not guilty on six counts of illegal lending to the Quinn family. .

As closing arguments in the trial commenced this afternoon, we asked Legal Coffee Drinker what it’s all about

Broadsheet: “Legal Coffee Drinker what’s it all about?”

LCD: “It’s an exercise of the power, inherent in any judge presiding over a jury trial, direct an acquittal by the jury on a charge where they feel, at the end of the prosecution case and before the defence calls evidence, that a prima facie case has not been made out by the prosecution in relation to that charge.”

Broadsheet; “Imagine I am a non Latin speaker with a rudimentary  knowledge of the law.”

LCD: “A prima facie case is evidence on which a reasonable jury could conclude that the accused was guilty of the offence charged. The DPP’s own website describes it a ‘admissible, substantial and reliable evidence’.”

Broadsheet: “Thank you. So the judge felt there wasn’t sufficient evidence that Mr FitzPatrick was guilty of the offences in question?”

LCD: “Yes. In particular he felt that there wasn’t a prima facie case that Mr FitzPatrick had knowledge of the Quinn loan, which was something which needed to be shown to prove guilt.”

Broadsheet: “Is a judicial direction to acquit appealable?”

LCD: “No. Section 34 of the Criminal Procedure Act 1967, as amended by section 21 of the Criminal Justice Act 2006, provides that where, on a question of law, a verdict in favour of an accused person is found by direction of the trial judge, the Attorney General or the Director of Public Prosecutions may refer the question of law to the Supreme Court for determination. However Section 34 is without prejudice to a verdict in favour of the accused. That means he remains acquitted, even if the Supreme Court holds the trial judge was wrong in directing an acquittal.”

Broadsheet: “So Sean FitzPatrick is free on those charges?”

LCD: “Yes. [drains coffee] But the trial continues against him on other counts. If the jury feel satisfied beyond reasonable doubt that he is guilty on those counts, he may be convicted. After that, sentencing is a matter for the trial judge. Rumpole’s golden thread provides a good definition of reasonable doubt if you are interested.”

Broadsheet: “Of course. You sound a bit like ‘She-Who-Must-Be Obeyed’ there” [laughs]

Broadsheet: “Thank you very much Legal Coffee Drinker. A great help as always.”