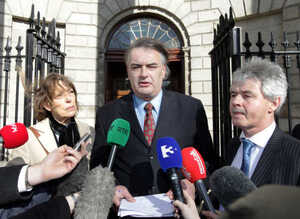 [Jules Thomas and Ian Bailey, with their solicitor Frank Buttimer, outside the Four Courts in 2012 – after Mr Bailey won a two-year legal battle against his extradition to France over the 1996 killing of Sophie Toscan du Plantier]

The investigation will look at the recording of calls, other than 999 calls, to and from Garda stations between January 1, 1980 and November 27, 2013; the Garda investigation into the death of Sophie Toscan du Plantier and the sequence of events leading up to the stepping down of former Garda Commissioner Martin Callinan last month.

Under the terms of reference, Judge Fennelly will also establish whether any of the recorded material has been destroyed and establish “any instances during the relevant period where the Office of the Director of Public Prosecutions made use of the data and information produced by the said telephone recording systems for any purpose”.

Further to this, Ian Bailey’s solicitor Frank Buttimer has told the Irish Times today that he believes the role of the DPP, the Department of Justice and the Attorney General in the Sophie Toscan du Plantier case should be included in the terms of reference.

Mr Buttimer maintains the DPP was aware of concerns surrounding the case and the handling of witnesses – Marie Farrell and Martin Graham – back in the late 1990s, while he said the DPP has also been aware of three senior gardaí meeting with the State solicitor for West Cork, Malachy Boohig, allegedly trying to secure a decision to prosecute Mr Bailey.

“We want to know why were these sleeping dogs let lie by the DPP office, the Department of Justice and why did the DPP/Department of Justice knowing all this, allowed the French state come here to seek to remove Mr Bailey from the jurisdiction in what we believe was an unlawful action.”