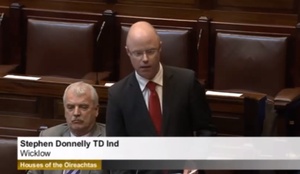 The Broadcasting (Amendment) Bill 2014, sponsored by Independent TD Stephen Donnelly in the wake of the Pantigate controversy, was debated in the Dail this morning.

The amendment proposes removing the word ‘offence’ from the ‘duties of broadcasters section’ of the Broadcasting Act 2009.

“The Deputy proposes this amendment in the full knowledge that a full refurbishment of the 2009 Act is under way. Put simply, the totality of this Bill is the excision of the two words “or offence”. What would happen if colleagues in the House generally started to trawl through statutes based on something they heard over their corn flakes on “What it says in the papers”, resolving to excise two words they do not like and call that proposal a Bill, and defending this legislative ingenuity on the basis of whatever argument is popular at the time?”

“I am considering an amendment that would require broadcasters to avoid causing undue offence. That seems to be more objective and more in tune with the realities of public debate and the Constitution.”

Donnelly: “The Minister is known to enjoy words. Perhaps he believes that the more words he uses, the wiser he seems. Perhaps he also believes that legislation is only worthy of his consideration and that of Parliament if it contains lots of words. I accept that his views may not be listened to at Cabinet. The Welfare of Greyhounds Act 2011 was debated day after day in the Dáil, whereas legislation containing more words – for example, successive Finance and Social Welfare Bills – have been guillotined and the House denied the opportunity to debate them. The Cabinet may not agree that the more words it contains, the more worthy is a Bill of debate in the Parliament.”

Rabbitte: “This is a ludicrous argument.”

Donnelly: For all of his words, the Minister almost completely avoided commenting on the content of the Bill.

Rabbitte: “The Deputy should not be ridiculous.

Donnelly:“It does not matter if the Minister believes the claim to be ridiculous. I have direct testimony from broadcasters that this is happening. This morning the House has been presented with evidence directly from broadcasters of how damaging it is for freedom of information in Ireland that they cannot broadcast material at which some may reasonably take offence.”

Rabbitte:” That is ridiculous.

Donnelly: “I take it from the Minister’s bombast that he will order Government Deputies to vote against the Bill on Tuesday. In so doing, he will make it perfectly clear where he, the Labour Party and the Government stand on seizing an opportunity in the House to improve freedom of speech.