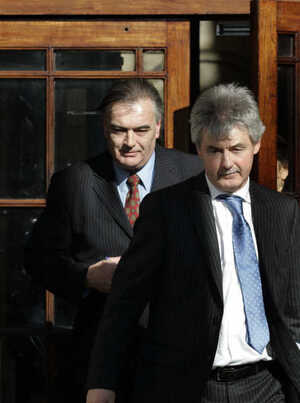 [Ian Bailey, left, pictured with his solicitor Frank Buttimer leaving the Four Courts after he won a two-year legal battle against his extradition to France over the killing of Sophie Toscan du Plantier in west Cork 15 years ago in January 2012]

This morning, the Irish Examiner reports that French police will travel to Ireland next month to investigate the Sophie Toscan du Plantier case, under the Mutual Assistance Act 2008, and that Ms du Plantier’s parents Marguerite and Georges Bouniol are planning to hold a press conference in Cork on May 17.

“How dare they think that they can come to this country and continue to investigate Mr Bailey, having already unlawfully tried to remove him from this country on foot of a European arrest warrant which the Supreme Court held to be unlawful; and in circumstances where it’s quite clear that the only so-called ‘evidence’ which created the warrant in the first place is the evidence which the government is now reviewing by appointing a commission of inquiry into allegations of police corruption.”

“How dare they continue to pursue a man who has not only not been charged with anything but, as far back as 13 years ago, our own director of public prosecutions produced documents that demolished the case against Ian Bailey.”

Knowing All This They Did Nothing