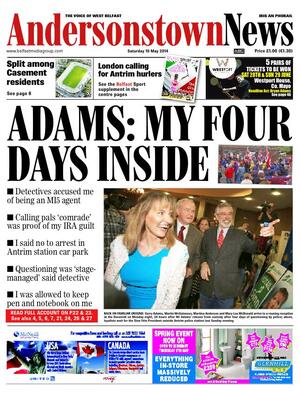 “I was told that the interrogations were an evidence-gathering process, and that the police would be making the case that I was a member of the IRA; that I had a senior IRA managerial role in Belfast at the time of Jean McConville’s abduction; and that I was therefore bound to know about her killing.

I challenged my interrogators to produce the new evidential material. They said that this would happen at a later interview but they wanted to take me through my childhood, family history and so on. Over the following four days it became clear that the objective of the interviews was to get to the point where they could charge me with IRA membership and thereby link me to the McConville case. The membership charge was clearly their principal goal. The interrogators made no secret of this. At one point the male detective described their plan as “a stage-managed approach”. It later transpired that it was a phased strategy, with nine different phases.

The first phases dealt with my family history of republican activism. My own early involvement in Sinn Féin as a teenager – when it was a banned organisation. My time in the 1960s in the civil rights movement and various housing action groups in west Belfast, the pogroms of 1969 and the start of the Troubles.

It was asserted that I was guilty of IRA membership through association because of my family background – my friends. They referred to countless pieces of “open source” material that, they said, linked me to the IRA. These were anonymous newspaper articles from 1971 and 1972, photographs of Martin McGuinness and me at republican funerals, and books about the period.

If any of these claimed I was in the IRA, then that was, according to my interrogators, evidence. They consistently cast up my habit of referring to friends as “comrades”. This, they said, was evidence of IRA membership. They claimed I was turned by special branch during interrogations in Belfast’s Palace Barracks in 1972 and that I became an MI5 agent! They also spoke about the peace talks in 1972, and my periods of internment and imprisonment in Long Kesh. This was presented as “bad-character evidence…”

The Jean McConville killing: I’m completely innocent. But what were my accusers’ motives? (Gerry Adams, The Guardian)