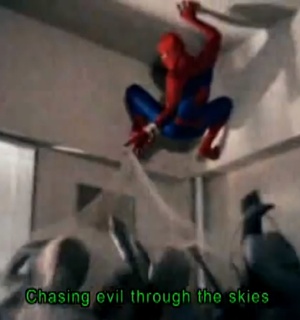 …back in 1978, the [Spiderman]  Japanese live-action television series was produced by Toie Company under license from Marvel and lasted for 41 episodes. The series revolved around Takuya Yamashiro, played by Shinji Todō, a motorcycle racer who is given spider-like powers after an injection of blood from the last surviving person of the Planet Spider.
Like any self-respecting Spider-Man, Yamashiro can shoot webs, but what separates him from his American counterpart is the fact that he gets his own giant robot.

Anyone Fancy A Nice Butt Pudding?