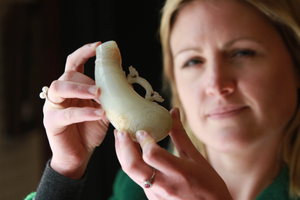 [Abigale Bernon with a jade ritual wine vessel which was originally estimated at €4,000 to €6,000 but eventually sold for €380,000 at Adam’s Auctioneers in Dublin on Sunday.]

At the Sunday Interiors Sale at Adam’s on St. Stephens Green this 18th century Chinese pale and russet jade ritual wine vessel sold to a Chinese bidder on the phone from Beijing. The successful bidder purchased the piece for a hammer price of €380,000 against very strong internet and telephone bidding, mostly from Chinese collectors both in China and North America.
It is thought that it would have been used to drink wine from during ceremonial occasions. It was consigned to the sale from a Dublin deceased estate. It was lightly carved with masks and scrolls and the handle is in the form of a double ended chilong dragon. It measures only 12cm long.