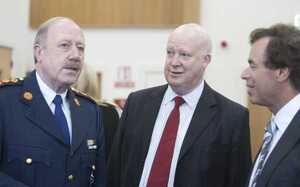 Mr Purcell has been invited to appear before the Oireachtas Committee on Justice, Defence and Equality on Thursday to answer questions in relation to his department’s handling of allegations made by Sgt Maurice McCabe, which prompted the publication of the Guerin Report last week.

It’s being reported that chairman of the committee, Fine Gael TD David Stanton sent a letter of invitation to Mr Purcell last Friday.

Members want to discuss the fallout from the Guerin Report, administration issues in the department and the resignation of the former garda commissioner Martin Callinan.

[Chairman of the Oireachtas Justice Committee David] Stanton said the committee had not yet received a reply from Mr Purcell.

Previously: The Secretary General, You Say?

He’s The Brian Of The Operation

‘Is Purcell Being Paid To Keep His Mouth Shut?’