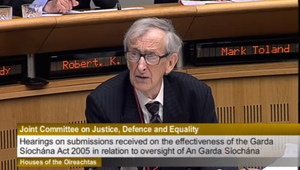 Retired Dr Richard O’Flaherty, who worked as an on-call doctor for Garda stations and who is a member of Justice4All, made his submission to the Oireachtas Justice Committee this afternoon as it heard submissions from various groups and people on the effectiveness of the Garda Siochana Act 2005 in relation to oversight of the gardai.

During his submission Dr O’Flaherty talked about his own experience of whistleblowing within the  gardai.

Dr Richard O’Flaherty: “First of all, I would suggest that all patients be entitled to their doctor of choice when they are in custody and that it should be a criminal offence for a guard to refuse and that he should be reported to the Ombudsman. Second, there should be a protocol put in place to protect vulnerable people which I was trying to describe to you, right? Thirdly, which I think is vital and it’s in England and everywhere else, no statement should be taken without a solicitor being present. I think it’s a crazy idea to let two detectives in to the illiterate or a person with limited intelligence or dyslexia to be making a statement, the guards reading a statement to, to them. I think it’s crazy in this day and age to have two big gardai coming in and having somebody, it’s intimidating enough to be in the presence of two gardai but to be in a garda station on your own, probably having been subjected to a little bit of intimidation, not to have a solicitor present, terribly… I think that appointments of the legal aid solicitors and doctors, the doctors that the garda call, should not be at the discretion of the gardai or the payment of the gardai. They should be independent: the doctors should have the same independence as a coroner. And, also, the same as England, that the doctors, or the solicitors who are present when the statements are taken, that they come from a panel and they have slots and it’s not at the discretion of the gardai to give the money to the free legal aid doctors to make multimillionaires out of the admired ones and the ones that they don’t like, they exclude them.

A clear protocol should be put instead, oh yes, the methadone. This is a disgrace. There was the death of a man in Dublin with 50ml of methadone. There was no history taken and the gardai go and collect the methadone from, they call in their assigned doctor who has no knowledge of the patient and prescribe methadone willy nilly. This is not helpful, we need a methadone programme to be put in place, not now, immediately. Actually, on that particular case, I contacted the coroner, I do deputy coroner, I had been doing deputy coroner until I got too old in Limerick and, believe me, I know what goes on. The gardai should not be allowed to go and inaudible the medicine, to the pharmacies for patients. Gardai should be trained in care of patients, if they are in the stations, downstairs and they are in control of medicine and they have no training, this is a disgrace in this day and age. They’re not trained in defibrillators. If somebody collapses they can’t use defibrillators.

The other one is, I’ve supplied to Mr Shatter [Former Justice Minister Alan Shatter], as a member of Justice4All, a statement, a draft statement and included that was photographs of beatings I saw in Garda stations, carried out by Gardai. And he has wrote back to tell me that he has started putting in, because of my approach, he has started installing CCTV cameras. He has already them in five, there’s 12 more. Before the end of the year, he had hoped anywhere in the public areas, or where prisoners are being detained, there will be cameras. In other words, safety for the gardai who’s alleged to have beaten somebody and safety for the patient who gets the crap beaten out of them downstairs. If you want to see the photographs I can show them to you. I took them in the cells and I produced them in the court.”

O’Flaherty: “I won’t go further into that.”

Stanton: “Your time is almost up actually.”

O’Flaherty: “Ok, but you spent most of your time lecturing me about how to…”

O’Flaherty: “Also, I, the whistleblower charter, I submitted that to Shatter, he’s already told me that he had that in line, whether or not the new minister finishes out that..and that charter of whistleblowing should apply to doctors: me, who put my head above the parapet. I was the one ‘disgusting’ in the medical profession, there was two in the gardai. And I suffered, I have been stopped for drunken driving, I flew up to the Regional immediately afterwards with no alcohol in my blood. I couldn’t go downstairs because I would have had the crap beaten out of me.”

O’Flaherty: “Yeah but I’m just putting it, to give it to you. And then two years down the road, I was fined five or six hundred pounds because  I refused to go downstairs to take a breathalyser.”

Stanton: “I’ll have to ask you to finish now because you’ve had more time than everybody else put together.”