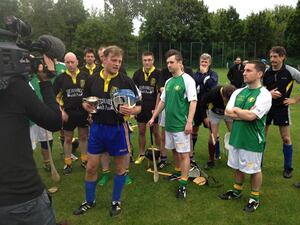 “At the weekend I went over to Dresden, Germany to play a Hurling match against Dresden GAA, who only set up two years ago. We brought over 11 lads of mixed abilities (some never having played the sport) to give them some match practice as their team is made up of some Irish hurlers and a lot of locals. The game was played on a rugby pitch, which I blame for the German team beating us. A German TV station covered the event , I think the commentator described hurling as an egg and spoon race but more aggressive.“

Is Camogie The Illuminati?

Cuala And The Gang