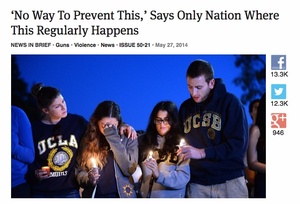 “This was a terrible tragedy, but sometimes these things just happen and there’s nothing anyone can do to stop them,” said North Carolina resident Samuel Wipper, echoing sentiments expressed by tens of millions of individuals who reside in a nation where over half of the world’s deadliest mass shootings have occurred in the past 50 years and whose citizens are 20 times more likely to die of gun violence than those of other developed nations.”

‘No Way To Prevent This,’ Says Only Nation Where This Regularly Happens (The Onion)

Anything Good In The Tallaght Echo?

Anything Good In National Geographic Traveller?

Anything Good In The Salford Advertiser?

Anything Good In The Castlegregory Parish Newsletter?