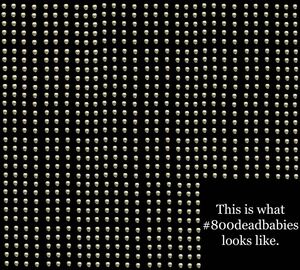 You may have been struck by the ‘strangely muted’ reaction to the Tuam Babies story in the Irish media since new revelations emerged in the Connacht Tribune  the Irish Mail on Sunday.

The horror of the discovery, or rather re-discovery, of the mass grave at the old site of the Bon Secours mother and baby home in Tuam, Co. Galway last week caused no more than a flinch for some, an involuntary turning away.

On the day that the tireless work of local historian Catherine Corless and her colleagues became known to the wider world, RTE News devoted their time to the story of Kim Kardashian and Kanye West’s honeymoon in Cork. In an age of instant information and desperate press oneupmanship, it is impossible that the revelations in Tuam escaped their notice. It is also unlikely that a conspiracy was afoot at the state broadcaster to keep this unfortunate story quiet.

The most likely reason for RTE’s inexplicable blindness, along with that of many other major news outlets, is much more prosaic and much more terrifying.

It was ignored because it wasn’t a story. It wasn’t news. It no longer surprises us that these things have happened.

Almost 800 babies shoved into a septic tank, uncared for, unmarked, unremembered? Of course they were. What else would you expect from the organisation that presided over the rape of thousands of children, the forced adoption of thousands more, untold years of slave labour, and the incarceration, brutalisation and shaming of women?

The story, which is gaining traction days later as news outlets recognise their terrible oversight, has garnered little more than a shrug from the established press, barely a mumble from the State, and a defensive, sidestepping statement from representatives of the Catholic church.

What can explain this reluctance to report, to engage, to imagine?

Certainly, no-one wants to imagine it.

That said, Irish people now outstrip their official mouthpieces. Many of us don’t share this reluctance. Given the opportunity, we react. In floods of outrage on social media, in the comments section of online news, in conversations on the street, in letters to the paper, people freely speak of things that we would prefer not to think about, but that it would be worse to forget.

With anger and disgust, people condemn the actions of a church that claimed to love and a state that claimed to care. The story goes global, but at home, fringe media and even satirical news sites provide coverage more hard-hitting than anything in the Irish Times. The attitude of ordinary people on this island toward the Catholic church has changed swiftly in the wake of scandal after scandal, while traditional media and government spokespeople still struggle against decades of ingrained deference and outdated modes of public engagement.

This week, Pope Francis, seeming concerned about the world’s chronic underpopulation, lamented the fact that some married couples choose not to have children. He accused these couples of selfishly preferring their holidays and dogs to the propagation of loyal young Catholics.

These future children, we can be assured, would be cherished. The children of marriage. The children of devout followers. Not the children of unwed mothers, the children of other religions and none, the unbaptised, the unwanted. Times have changed since these children were left to die of neglect and disposed of in septic tanks, but they are still not the right kind of children for the church to cherish.

The church that still reaches deeply into Irish lives and psyches is not the church of Jesus Christ, a man who by all accounts simply wanted people to care for one another without reservation or prejudice. It is an organisation that thrives on power, that runs on secrecy, that entangles itself in the lives and deaths of its followers.

However, revelations about babies in septic tanks, now matter how slowly they filter into the mainstream, are unforgettable once lodged in the public imagination. Ireland has changed, and continues to change, while the press and government struggle to keep up with the outrage of the people.

Some members of government suggest a memorial might be in order. The Archbishop of Dublin thinks that the matter is possibly worthy of a social history project. What neither of them wants is an excavation.

Why? Because an excavation means bones. Bones that will be brought to light, touched, examined, photographed. Bones that will reach the front pages of papers and the corners of the internet. Thousands of tiny, fragile bones, permanently engraved in the minds of Irish people everywhere.

We couldn’t be having that.

Everytime I Try To Leave They Pull Me Back In