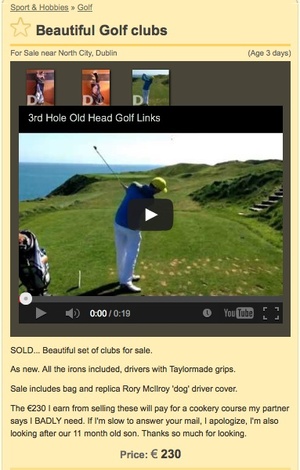 “[Radio Nova’s] Morning Glory newsman Conor Irwin last week naively told everyone listening to Radio Nova that he wished his other half had taken cooking lessons. Following the comment, his girlfriend Ciara got in touch with the show’s hosts Marty and Joan to devise a plan that would hit Conor where it hurts. The cunning plot involved the gang posting an advert on Done Deal offering Conor’s “Beautiful Golf Clubs”, which are worth over €2000 for the low cost of €230. Needless to say, Conor got quite the shock when it was revealed live on air that his pride and joy were being fobbed off….”