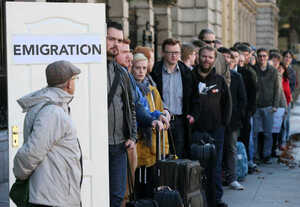 The Greatest Country in the world in terms of its contribution to humanity.

Not so fast, so-called United Nations.

Our reaction to the economy’s collapse reveals deep flaws in the Irish psyche. Firstly, there have been no protests of note, nor riots. The political awareness of what happened and what is continuing to happen is virtually zero. People have lost their jobs, houses and friends and family members to emigration, every budget in our social services is being slashed to ribbons, and future generations are being buried beneath mountains of debt from which they’ll never escape. But the prescription here seems to be inaction, moaning about expenses and some vague tabloid waffle, blaming the Polish for fiddling the dole when most of them have long since gone home.

…We’ve almost been put in the ground by inflated property prices yet, secretly, all we’re hoping for is another fucking bubble. It doesn’t matter what sort of delusion and corruption has to take place for this to happen. We’re willing to turn a blind eye, again, if it means a return to the glory days of the mid-2000s and another excuse not to confront the bald reality – which is, if you want a sustainable first-world economy, you actually have to make stuff (which we still don’t seem interested in doing).

…But what about our younger people, those too young to have really experienced the bubble? Like I said, many of them have gone, are going or are trying to go. Whether spurred on by university debt or just an unwillingness to waste their lives rattling around their hometowns on a permanent roundabout of JobBridge gigs – Ireland’s equivalent to Workfare – they don’t have the time to fight. Every year 90,000 people leave Ireland, most of them young. And the remaining ones? They don’t have the will. Disenfranchised, demotivated, they struggle to keep their heads above water and some sense of self-esteem intact as they’re funnelled here and there by aforementioned government programmes in the vague hope that – one day – it’ll all end….”

Ireland Is definitely Not The Best Country In The World To Live (James Nolan, Vice UK)