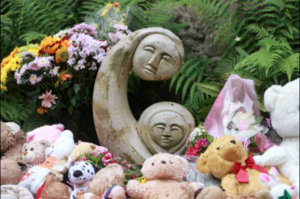 Toys and flowers at the Little Angels memorial plot at Bessborough House in
Blackrock, Cork

Yesterday afternoon, the Department of Children and Youth Affairs published its Report of the Inter-Departmental Group on Mother and Baby Homes.

On page 17 of the report it begins to deal with the matter of the 1961, 1971 and 1975 vaccine trials carried out by Burroughs Wellcome – since taken over by GlaxoSmithKline – as seen in the following screengrab:

However, it’s missing something.

Specifically, the final sentence in that paragraph is missing the total number of children which received the vaccines.

These vaccines were administered to a total of children in Ireland, one hundred and twenty three of whom were resident in children’s homes in various parts of Ireland.

Furthermore, the report states 123 children who received the vaccines were residents of children’s homes across Ireland.

However, the report then includes a table which summarises the findings of a report into the vaccines carried out by the then Chief Medical Officer of the Department of Health, Dr Jim Kiely, in 2000 and the figures in the table don’t add up to 123. 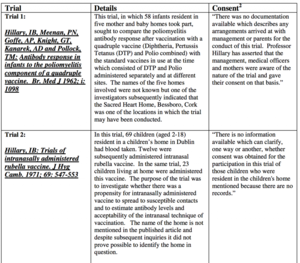 In addition, the report didn’t include the 1930-1935 trials of a Burroughs Wellcome vaccine for diphtheria carried out on 2000 children in residential institutions. Nor did it mention the 1965 trial of a ‘five-in-one’ vaccine carried out on Philip Delaney at Bessborough Mother and Baby Home, Cork.

“The Therapeutic Substances Act, 1932 was the statute governing the importation and use of vaccines in these trials. The Chief Medical Officer was unable to locate or identify documentation which would confirm whether or not the legal requirements of this Act were complied with in respect of these three trials.”

And in relation to the matter of consent, it found:

“As the subjects of these trials were children, effective consent to their participation in the trials could only have been given by their parents or guardians. The requirement for such consent to be obtained was clearly understood by researchers and articulated in a number of documents available to the research community at the time.”

Why So Kind GlaxoSmithKline?

15 thoughts on “Trials And Error”