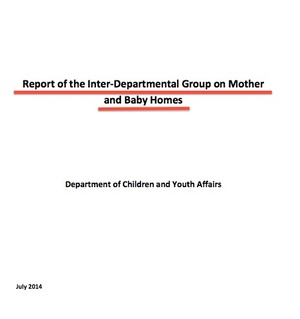 The Department of Children and Youth Affairs last week published the report of the Inter-Departmental Group on Mother and Baby Homes.

This sets out the conditions against which the Commission of Investigation into matters related to mother and baby homes will operate.

We asked Legal Coffee Drinker what it’s all about and is it worth the paper it’s written on?

Broadsheet: “Legal Coffee Drinker, firstly what’s it all about?”

Legal Coffee Drinker: “It’s a Report which representatives of various government departments were initially asked to compile on the Tuam Babies controversy, the research carried out by local historian Catherine Corless, which disclosed that  796 babies died in the Bon Secours Tuam Mother and Baby Home between 1925 and 1961.
Subsequently, the Dail, in a motion passed on the 11th June last, requested that the Group extend its remit to consider all mother and baby homes, so as to assist – and I quote – “in establishing the truth regarding these institutions and the treatment of those who were in their care”. More specifically, the motion asked the Government, through the Group, to:

(ii) assist in relation to the scope, format and terms of reference of a Commission of Investigation to inquire into issues relating to these homes.

Broadsheet: “So this is all covered in the Report?”

LCD: “Regrettably not. The Report fails to effectively identify (i) information and records relating to the mother and baby homes discussed. In addition, the assistance it purports to provide in relation (ii) to the scope, format and terms of reference of a Commission of Investigation is somewhat… less than edifying.”

Broadsheet: “What IS in the 37 pages of the Report, then?”

LCD:” It takes some time to find out, due to the fact that whoever prepared the Report forgot to include an index for ease of readers. But here goes. There’s a short introductory chapter, a list of members of the Group and a discussion of the scope of its remit. So far so good – although even these chapters are taken up largely by ‘dog ate my homework’ complaints about not having enough time to do the work required properly.
At this point we should be getting on to the meat of the Report. Sadly, what comes next is a Leaving Cert-style essay on the history of ‘unmarried mothers’ in Ireland, mostly consisting of bits lifted from well-known texts such as “Occasions of Sin: Sex and Society in Modern Ireland”.
The only ‘meat’ so to speak, is in Chapter V of the Report, entitled ‘Mother and Baby Homes’, and it is somewhat lean pickings as far as the information and records requested by the Dail is concerned.
The section in this chapter on the Tuam mother and baby home, being, you will recall, the very institution with which the Group was originally established to deal, contains merely a potted summary of information already in the public domain. As regards the records kept by the Bon Secours sisters in charge of the home, all that we are told is that such records exist and are with the Child and Family Agency. We are not given any idea whatsoever of their content. One would have thought that the figures compiled by Corless, and replicated in the Report, of 1,101 births and 796 deaths in the home between 1925 and 1961 merit at least a paragraph on the nature and content of these records.
However the information given in relation to Tuam is a veritable goldmine compared to that provided in respect of the other mother and baby homes listed. We are told that the records for St Clare’s, Stamullen, are also with the Child and Family Agency (once again, no further information is given). A subsequent section (p12) headed ‘Bethany Home’ appears to be strangely truncated; two sentences only and we are not even told where the records of this home, if any, are kept.
As regards the other mother and baby homes listed in the Report, no information is provided other than their names, their dates of operation and the institution in charge of such. In particular, we are not told whether or not their records are still available, and if so, who holds these records.
Given the stated remit of the Group’s task, this omission is so extraordinary that one wonders whether the person responsible for drafting this report, in their enthusiasm for ‘cut and paste’ could inadvertently have ‘cut out’ 100 pages or so. But apparently not, and the result is that we are no wiser, as regards these homes, after reading the Report than before…

Broadsheet: “And does the Report deal with the second request by the Dail, namely to advise on the scope, format and reference of a Commission of Investigation?”

LCD: “It purports to do so in the next chapter [VI: Establishing an Effective Modus Operandi] but fails lamentably. Such suggestions as are made are a master class in stating the obvious: for example, the Group remarks that “establishing an effective approach to the matters to be investigated is essential if the Commission is to provide valuable findings in a manner cognizant of the sensitivities of those involved and the importance of undertaking its work on a timely and cost-effective basis”. Even more helpfully, it goes on to state that “[t]he subject matter of this proposed Commission of Investigation by its nature is likely to encompass a number of diverse elements. The methodologies to be adopted by the Commission must be effective and should be differentiated.” This would be fine if, you know, it was actually followed up by some information about what the Group would regard as ‘an effective approach’ and appropriate ‘methodologies’. It isn’t.
One thread which does run consistently through this Chapter, however, is that of keeping costs down, the Group being at pains to emphasise how important it is “that investigations be conducted in a cost-effective manner since unnecessary expenditure is at the expense of meeting other important demands on the Exchequer, including today’s priorities for the improvement of the welfare of children.”

Broadsheet: “So ‘effective’, for the purposes of the Report, equates with ‘cost effective’?”

LCD: “That’s certainly the impression left. The only bits when the Report comes alive are where it talks about saving money. Page 28, for instance, is devoted to criticism of money spent on the Moriarty, Mahon and Morris Tribunals – even though the Dail motion with which the Group is purporting to comply has asked for advice not on a Tribunal but on a Commission of Investigation.
There’s also a somewhat worrying endorsement [p30] of what it calls the ‘very effective approached’ (yet another misspelling in the Report!) adopted by the Commission of Investigation into the Catholic Archdiocese of Dublin regarding the selection of ‘representative samples’ for investigation.
Where possible, the Group passes the buck on the task of terms of reference to somebody else. For example, on the question of whether or not adoption issues should be included within the remit the Commission of Investigation, the Group states [at p16] that, in view of the fact that Section 88 of the Adoption Act 2010 restricts access to adoption records, any consideration of this issue should be in conjunction with the Adoption Authority and the Registrar General, which rather begs the question: couldn’t the Group itself have consulted these persons in the course of preparing the Report?
As regards the question of inclusion of vaccine trials [p19] the Group expresses the somewhat self-evident view that the drafting of an order including such trials within the remit of the Commission “should be the subject of careful consideration”. Obviously not by the Group though, because they don’t say anything further on this matter. The same applies to the question, also left hanging by p23 of the report, of whether or not the issue of anatomical examination of bodies of infants should also be considered by the Commission.”

Broadsheet: “So basically, a Group set up to advise on terms of reference and the method of conducting an enquiry does neither?”

LCD: “In short, yes. The entire report reads like a badly written class essay: lots of cogging, some attributed, some not, spelling and grammar mistakes, bits apparently deleted by accident, at least six references to not having enough time to do the work properly…”

Broadsheet: “OK. You also mentioned that the women in the Homes were referred to as ‘unmarried mothers’ throughout the Report.”

LCD: “Yes. A footnote on page 6 of the Report states as follows: “the historical term ‘unmarried mother’ is used in this document based upon the language and thinking of the time. The more contemporary term of ‘single mother’ is acknowledged as being more suitable and acceptable when referring to the present day.”

Broadsheet: “And the conclusions reached by the Report?”

LCD: “There aren’t any. Well not any, which don’t involve stating the obvious. Have a look at p32 onwards if you don’t agree with me. Hang on, that’s not quite right. The Report does come to one substantive conclusion, namely that almost 24,000 children were born in the institutions concerned. Which might, one thought, have merited a more serious consideration of the issues contained in the Dail motion.”

4 thoughts on “A Waste Of Copy And Paste”