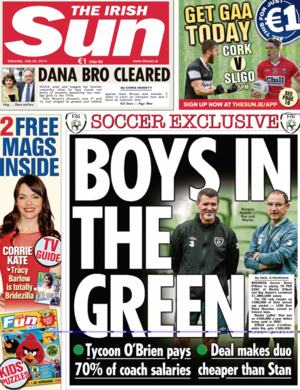 “Business tycoon Denis O’Brien coughs up a staggering 70 per cent of [Martin O’Neill and Roy Keane’s] pay packets – which amounts to €910,000 of the combined €1.3million wages.
…
“We have learned that O’Neill earns a cool €1million a year while sidekick Keane collects €300,000 per annum.”

“The Football Association of Ireland secured a debt write-down of €11.7 million, delegates at their Annual General Meeting in Athlone heard today.”
…

“Today’s AGM was Chief Executive John Delaney’s tenth at the helm of the Association, a period that has been financially challenging for the FAI. In his review of the year, he said the highlight was the refinancing of the stadium debt. The Board recently asked Delaney to continue as chief executive for another five years, a move that’s expected to cost the association €1.8 million or €360,000 a year.”

Boys in the Green (Irish Sun)