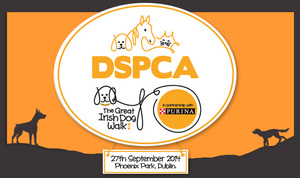 Lead him/her on The Purina Great irish Dog Walk in aid of Dublin SPCA in the Phoenix Park, Dublin.

Dog lovers everywhere are being asked to join the Dublin Society for Prevention of Cruelty to Animals (DSPCA) for The Great Irish Dog Walk 2014 in the Phoenix Park, Dublin on Saturday, September 27, from 9am to 4pm. The event will consist of a fun 3km walk and a doggie-themed family festival featuring All dogs and kiddies are invited to take part for FREE, while adults will be charged a €10 registration fee.

The DSPCA will also host an attempt to break the Guinness World Record for the Largest Dog Obedience Training Lesson, beginning at 1.00pm. Alex Petrilli, the RTÉ Dog Whisperer and founder of King of Paws training academy, will lead this attempt. The current world record is 390 dogs, which was set in Madrid two years ago.

3 thoughts on “Show Your Dog Cares”