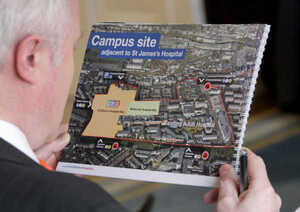 The head of the Jack and Jill Foundation has said he has been sent two anonymous letters which he says proves the site of the new National Children’s Hospital is inappropriate.

The letters, which are purported to be from senior officials, set out details of an overspend in the planning and design process at St James’s Hospital in Dublin.

The Jack and Jill Foundation’s Jonathan Irwin said he is concerned about one of the letters’ claims that the same architects involved in the failed bid to build the hospital at the Mater are once again involved at St James’s.

Charity claims to have anonymous letters telling of overspend on Children’s Hospital (Breakingnews.ie)