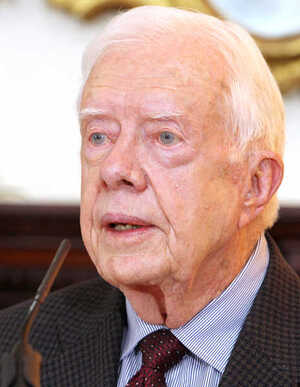 Former US president Jimmy Carter has called on Ireland to take a lead in introducing legislation to target the buyers of sex.

In letters to the Taoiseach, the Minister for Justice and all members of the Oireachtas, Mr Carter urged politicians to act with a “sense of urgency” to protect prostituted women and girls. In the letters, Mr Carter acknowledges the progress being made in Ireland towards passing legislation that would target the buyers of sex.

Both The Lancet and The Economist have called for prostitution to be decriminalised:

Sweden’s avowed aim is to wipe out prostitution by eliminating demand. But the sex trade will always exist—and the new approach has done nothing to cut the harms associated with it. Street prostitution declined after the law was introduced but soon increased again. When Rhode Island unintentionally decriminalised indoor prostitution between 2003 and 2009 the state saw a steep decline in reported rapes and cases of gonorrhoea. Governments should focus on deterring and punishing such crimes [slavery and child prostituition] and leave consenting adults who wish to buy and sell sex to do so safely and privately online.

The Lancet: HIV and sex workers

Previously: You Ain’t Seen Novena Yet

24 thoughts on “Kicking It To The Kerb”