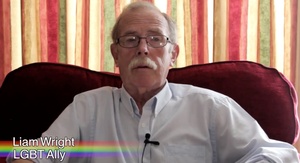 They want everyone married.

“This is a video that a group of friends [Aisling Gill, Cassie Delaney and Sorcha Crilly] and myself have made about Marriage Equality. The video is called “Our Equal Marriage” and centres around the question “What does Equal Marriage mean to you?” The main aim of the video is to show that equal marriage will not only be a positive step for the LGBT community but will positively affect our heterosexual families and friends as they want us to be happy and to enjoy the same rights as they do.”

2 thoughts on “The Equalisers”