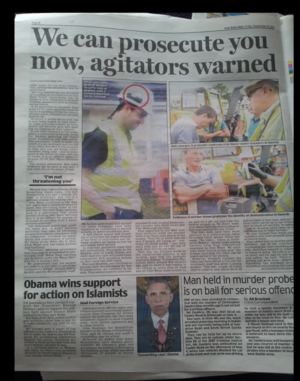 In one video obtained by this newspaper, a [Irish Water] contractor in Swords, north Co. Dublin, assisting the water meter installers in July tells assembled protesters: “I want to make you aware you are in breach and you are being video-recorded at this moment of time and you are being video-recorded being told – and in some point in the future we may take you to court, it is an offence [against] section 12 [of the] Water Services Act.’

The worker continued: ‘But video evidence can be used at any time. I just want you to be aware of that. We now have video evidence of you breaching these rules…I’m not threatening you but I reserve the right to prosecute, and this is a promise is what I’m making (sic).’

Irish Water confirmed to the Mail last night that a contractor hired by them was recording some of the protesters. The semi-State company said in a statement that under section 12 of the 2007 Water Services Act, it is an offence for anyone to obstruct or interfere with a water services authority.

22 thoughts on “The Revolution Will Be Televised”