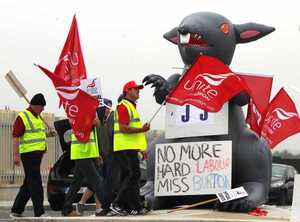 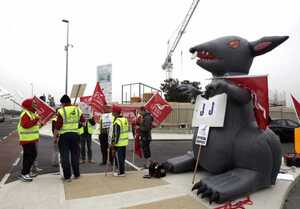 A picket organised by the trade union Unite on the  JJ Rhatigan site, Kishoge Community College, Lucan, in a row with the construction company over pay and conditions.

” The union claims that some members working on the JJ Rhatigan site are earning less than the minimum wage. Unite say the workers on Rhatigan’s Kishoge site have been forced into self-employment, with some earning less then €5 per hour. Unite also say that JJ Rhatigan is the main contractor on a range of school building projects. The Department of Education has a resposibility to ensure that contractors comply with the spirit as well as the letter of Ireland’s employment laws….”

2 thoughts on “Barely A Nibble”